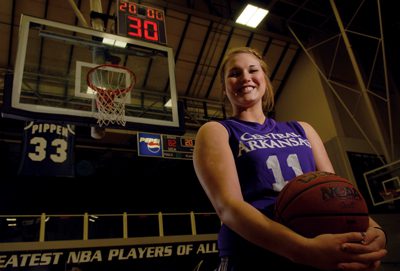 “If you step outside the box and allow yourself to take in the game of women’s basketball on any level, it’s unbelievable,” said UCA Sugar Bear Coach Matt Daniel. “It’s spoken by the record books. [Herbert’s] not really caught up in it. She’s proud of what she’s doing, but at the end of the day it doesn’t determine who Megan is.

“It’s a phenomenal individual effort. It wasn’t a goal. We just wanted to win games, and it just so happens that the streak has come along with it. It’s become its own beast.”

As of press time, the Sugar Bears were 18-6 (8-3 in the Southland Conference), a significant improvement from the 6-23 record in Daniel’s first season last year. Herbert isn’t the only freshman that has contributed to the turnaround, but the forward from Shiloh Christian has played a big part in revamping the new-look Sugar Bears.

“I didn’t have any personal goals when I first came here,” Herbert said. “My goal every time I play is just to win. I don’t care if I have to sit on the bench and cheerlead the whole time – if that’s what it takes to win, then I’ll be happy.

“I started getting these double-doubles and it wasn’t really a big deal. I just wanted to keep winning. It’s never been a goal of mine. I just want to go out there and win games.”

Daniel first saw Herbert play when he was an assistant coach and recruiting coordinator at the University of Missouri. He watched the ninth-grader compete in an AAU tournament. Three years later, Daniel was the head coach of the Sugar Bears, and Herbert was still on his radar.

“She’s as competitive as I’ve ever been around on the basketball floor, but she’s also as humble as I’ve been around with all the accolades she’s been receiving. I think part of that is because she’s such a good person, but another part is that she has no idea what she’s doing on the national stage. I mean she really doesn’t get it. It’s a compliment to her, not an insult. She’s just not that into it. She just wants to win, and you can see that on the floor.”

The streak had supposedly ended at Texas A&M-Corpus Christi when Herbert finished one rebound short in an 86-65 loss. Daniel wasn’t convinced.

“We didn’t play well at Corpus, so I just wanted to move on and prepare for our next game,” Daniel said. “But I just couldn’t sleep – something was just stuck on me. When I went back to watch film, I didn’t expect to find anything. People make mistakes all the time, but you expect those numbers to be concrete. You forget that it’s human. We found two more rebounds that were pretty obvious.

“It’s not like other categories where maybe it’s an assist or maybe it’s a steal. Rebounding and scoring are easy to verify. We had our officials look at it, and they thought it was worth sending to Corpus Christi. They looked at it and corrected the mistake. I take my hat off to them for their willingness to understand the situation and get it right. If you’re about growing our game, it’s not about being right, it’s about getting it right.”

Herbert started the streak in her first game as a college athlete. She is often undersized on the post – she’s 5-foot-11 – but she’s managed to consistently put up numbers.

“During the game, the streak is not a thought in my mind,” Herbert said. “I might think about it a little bit before the game to help prepare myself. It helps me focus on the fact that I just can’t go out there and play – I have to always work hard.

“I do not even know how to say it. It’s unbelievable and weird to me. I’m from a small private school in Arkansas and now I’m up there on the list with all these Hall of Famers and great basketball players. It’s incredible, and I’m so thankful for it. Who gets the chance to do this? It’s very rare and special.”

What’s even more special? The Sugar Bears are winning again, and they’re doing it with the youngest women’s team in the nation.

“I’ve never been known for my patience, so working with so many young players has been a test for me,” Daniel said. “But if we were going to build a program, we needed to change the mentality. Mission accomplished – that’s been done.

“These girls are a really tight-knit group. They’re a bunch of girls trying to be women. They’re goofy. We’ll come out some days and it’s like social hour instead of practice. It’s like recess sometimes with all these babies. We act like the youngest team in the country every possession, but we’ve found ways to win games. Hopefully we can continue to do that. I knew we had to flip the mentality.

“We’ve done that since day one, and you can see where mentality can get you.”