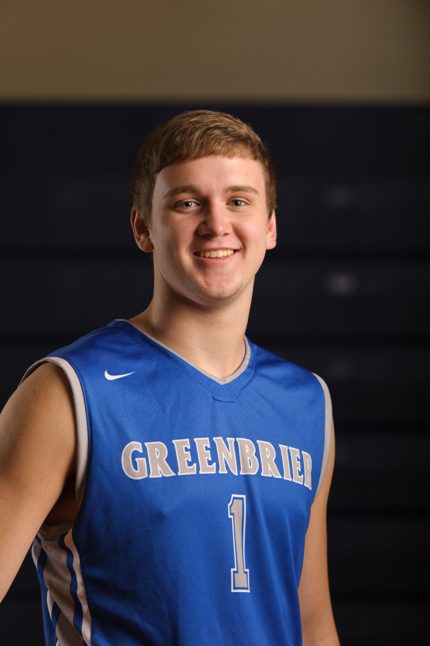 
The Greenbrier Panthers have had their share of ups and downs this season. Despite being eliminated from state tournament contention, senior center Tyler Williams says there’s still plenty for the team to play for.


“Although our season hasn’t gone the way we wanted it to, I still encourage my team to play its heart out like we’ve always been told to,” Williams said. “All season long, I’ve been focused on giving my best effort on the court. Regardless if I have a 30-point game or a 10-point game, I know that if I gave my best effort, then I’m satisfied. That’s what I’m trying to teach my team, too.”


Williams was selected to this year’s 501 Basketball Team — 35 players representing the best the 501 has to offer both on and off the court. He was nominated by his head coach, Mike Simmons.


“Tyler works hard, is very unselfish and is a team-first player,” Simmons wrote in his nomination. “He is respectful, Christian-centered, family-oriented and a great teammate. He cares about each individual on the team and puts the team’s goals first before his own.”


A nine-year veteran of the game, Williams’ reasoning for picking up a basketball is quite unique.


“When I was younger, I had an older brother who played baseball,” Williams said. “I remember going to his practices and I didn’t like how hot it was outside. I knew that it wasn’t for me. I chose to play basketball instead because it was air conditioned. Plus, I was a lot bigger than most kids, and my height gave me a huge advantage over other players on the court.”


Over the years, Williams has made many memories on the court. However, the senior says there’s one basketball moment that he’ll always cherish more than the others.


“Last year, I received quite the surprise after one of our home games,” Williams said. “After the game, when I went to meet my family, I found out that my grandmother had also attended the game. She had never been able to come to one of my games before due to health reasons, but seeing her there was very moving for me. It brought me to tears. It made my entire year.”


This year, Williams and his teammates learned a valuable lesson from a loss to a tough conference foe.


“Earlier this year, we faced off against Morrilton in a tournament championship game,” Williams said. “It was a close game, but we eventually lost by one point. Although we weren’t successful that night, our performance helped us realize that those players weren’t much different than us. They’re a team that’s currently at the top of our conference. If they can win and be successful, why can’t we? When I go to the gym to practice, I remember that we’re just as good as them. I try to tell my team that with a little hard work, we can play against anyone in the conference and excel, too.”


With just three games left in his senior season, Williams sees three opportunities for the Panthers to make a statement in the 5A West conference.


“I’m ready to face off against Harrison again,” Williams said. “The last time we played we got beat pretty badly on the road. I don’t like losing like that. When they come to Greenbrier this week, we’ll be ready to show them that we’re a better team than the previous score indicated. We get another chance.”


Despite being underdogs, Williams and the Panthers are working on a strategy for upsetting the Goblins.


“We have to play our guts out,” Williams said. “We have to give it everything — make all the hard-nose plays like fighting for rebounds and always hustling. They have two really good scorers and if we can keep them contained, we have a good shot at taking them down.”


Off the court, Williams volunteers in the community as a member of Greenbrier’s EAST club and is a member of Immanuel Baptist Church. In his free time, the senior enjoys fishing and hanging out with friends. After high school, Williams’ plans to continue his basketball career on the collegiate level.


“This year, my goal was to play well enough to be recognized so that I could continue playing at the next level,” Williams said. “I’m proud to say I accomplished that goal. During an AAU tournament in Branson, Mo., a scout from Henderson State University noticed me and started contacting me regularly. Six weeks later, I was offered a full ride. I’ve fallen in love with the school and coaches and I know it’s where I’m meant to be. I’m ready to be a Reddie.”