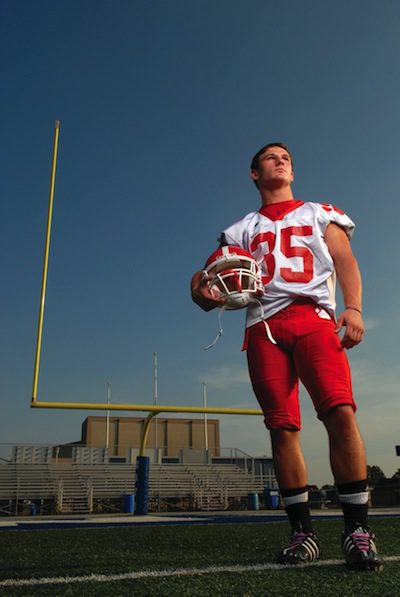 
In the 12 years that Chase Boyles has played football, his most memorable moment occurred in the first game of his last high school season – an interception for a touchdown.


Chase was among the 17 players from Central Arkansas named to the first 501 Football Team.

Nominated by his coach, Michael Malham, Chase was recognized for his leadership on the field, including calling plays for the defense. “To get all the players on the same page, it can be tough sometimes.”


Chase also plays “full speed,” according to his coach. His philosophy is “practice like you’re in a game and play like it’s your last down.”

“I want to make every down worth it,” he said. While he is not planning to play college ball because of his size “you never know.”


Chase is appreciative of his coach’s kind words and his selection for the 501 Football Team. “I am thankful to be in 501 Football.”


A son of Steve and Tanya Boyles, the senior linebacker for the Cabot Panthers grew up in a football family and has been playing the sport since he was 5. He began playing while in kindergarten through the local peewee program. While he used to also play basketball, he decided to focus solely on football.


Chase plans to attend college, perhaps at the University of Arkansas at Fayetteville, and is considering a major in kinesiology for a career in athletic training or physical therapy.


On the football field, Chase was inspired by Spencer Newman, who was a senior on the Panther squad when Chase was a sophomore. Spencer now plays for the University of Central Arkansas football team. Chase said Spencer ran plays on defense and “was really good on the field.”


As he reflects on the many years he has played football, Chase said two moments stand out. In the season opener against Jacksonville, Chase made an interception and ran for 65 yards to score a touchdown. “It was my first touchdown ever. That was a pretty big moment for me. It was pretty crazy.”


The other memorable moment was last year against North Little Rock when he made the game winning tackle during overtime.


With a 3.79 GPA, Chase also performs well in the classroom. He recognizes the importance of education and maintains a good work ethic. His favorite subject is sports medicine. “I try to be as organized as I can be,” he said.


His coach also describes Chase as “well mannered” with “great character.” Chase attributes those qualities to his parents and his upbringing. “It’s the way they raised me.”


A member of the National Honor Society, Chase has participated in a variety of community service projects including the Cabot cleanup and a diaper drive. He also attends First Baptist Church of Cabot.


Chase is also giving back by helping coach the seventh grade football team at Cabot. He is sharing his love of football and work ethic – on and off the field – with the next generation of Cabot Panthers.