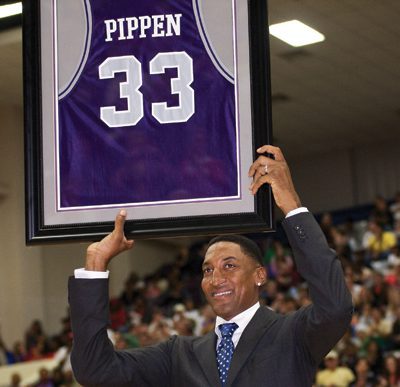 On Jan. 20, Scottie Pippen returned to where his basketball journey began – the Farris Center at the University of Central Arkansas.

“This probably ranks up among the top [of my accolades],” Pippen said. “I had my jersey retired in Chicago a couple years ago. I look at this as being just as high as that because as I look back, this is where it really began for me. This was really the first giant step that I made. To be able to transition from a walk-on to someone who now can say has his number is retired here, this is probably one of my highest accolades.”

Pippen came to UCA from Hamburg (Ashley County) in 1983, and served as a team manager his freshman year.
“The first time I laid eyes on the kid, he was pushing a grocery cart with dirty socks and jocks through the Farris Center,” said Monty Rowell, who covered Pippen and the Bears on KCON-AM 1230.

Pippen came a long way in the span of a year. He ended up seeing time on the court due to injuries to key players in front of him, and he averaged 4.3 points per game. By the time he was finished at UCA, he was four inches taller and a two-time NAIA All-American.

“He was an all-around player,” said former UCA Coach Don Dyer. “He could play every position on the court. He was a team player with a great attitude. He was a great worker, and he just kept getting better and better. He improved so much from one year to the next.

“I had high hopes for him, and he came through.”

Pippen was selected No. 5 overall in the 1987 NBA Draft. He was drafted by the Seattle SuperSonics before being traded to the Chicago Bulls.

In Chicago, Pippen teamed up with Michael Jordan, and the two went on to win six NBA championships.

“I always dreamed that I was going to be a great player,” Pippen said. “I didn’t know how it was all going to play out.

“If you’re dreaming, then just work hard at that dream. Never give up.”

A record UCA crowd of 5,297 welcomed Pippen home. The Bears capped off the evening with a 64-50 win over Nicholls State.

“It’s always great to come back and see something you haven’t seen in awhile,” Pippen said. “Watching players play on the court and knowing

I once played here – it was a different court at the time, but it’s the same atmosphere.

“It brought back a lot of memories of my playing days . . . Throughout those four years, I’ve watched the stands fill up more and more.

Friends and other athletes from the university would come over and cheer for us. Eventually basketball became a lot of fun. A lot of great fans filled in the crowd, but nothing like tonight. Tonight’s crowd is as [big] as I’ve ever seen it. To come back after [23] years and see that, it’s a great feeling for me.”