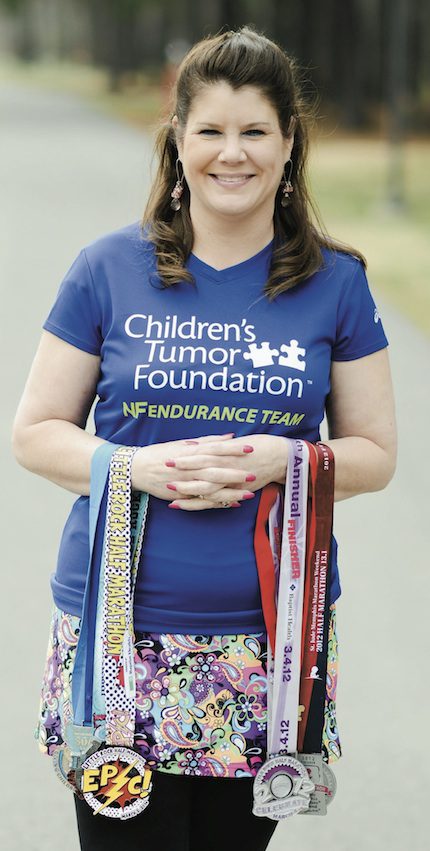 24 Oct Perseverance: Player battles back from injury to re-join team

Logan White does not give up.


Whether it is rushing past offensive lineman that outweigh him by almost 100 pounds or facing weeks of painful and exhausting rehab for a knee injury, the Conway Wampus Cat junior middle linebacker remains solid.

For White, it began during his freshman season. He had been talked into moving to linebacker by Assistant Coach Greg Hughes and seemed on his way to a promising high school football career. A quirky knee injury on April 8 during spring practice before his sophomore year changed things in a hurry.


A week after the knee injury, White and his family got the worst case scenario from Orthopedic Surgeon Dr. Grant Bennett. “Chances are not good that you will ever play sports again,” recalled the player’s mother, Amy Beam. Bennett explained that not only were his ACL and MCL’s torn, but there was damage to the meniscus, the padding in his knee. The meniscus cannot be replaced by synthetic parts.


After five hours of surgery on April 29 to repair extensive damage to White’s knee, Bennett was a little more optimistic. He might be able to play his last two years of high school sports, but he would have to choose between football and basketball. He chose football.


Times were difficult early. After the anesthetic wore off, “it was by far the worst pain I have ever felt. I would rather get hit by a 300 pound lineman every day for the rest of my life than go through that again,” White said. Once he was released from the hospital, he was on crutches for two months.


“I won’t lie, I got very frustrated; there were weeks of doing the same exercises, over and over, three days a week for hours,” said White. While his dreams of playing for the Razorbacks or even joining his friends on the football team seemed distant at the time, he never quit. Visibly proud of her son, Beam said, “Athletes are either going to give up in that situation or they are going to work extremely hard.”


“Logan always came to therapy prepared to work hard,” recalled Milligan. “From day one, he was dedicated to as fast of a recovery as possible and was fearless. He didn’t let fear of his injury slow him down. Fear of re-injury is often the biggest obstacle that athletes face.”


Shortly after rehab began, White’s stepfather, Austin Beam, gave him another dose of inspiration by making a hand-made silhouette of a football player that hangs over White’s bed. He said the turning point came for him when the exercises began to get easier and he began walking without a limp. “I knew I was going to do it then,” he said.


About six months after rehab began, White was able to run again on a treadmill or grass, but only in a straight line, no cutting. That would take another three months. “It felt weird,” White said. “I had to teach myself to run again.”


He was cleared to practice in January.


By the summer, White had returned to practice with the rest of the Wampus Cats and was squatting as much as 460 pounds. “Logan loves football and it’s evident when you watch him play and prepare each week,” said Conway High Coach Clint Ashcraft. “Logan wants to please his coaches and does everything that’s asked of him. He’s got a good work ethic on the field and off.”


White, who is now listed at 6-0, 220, plays in one of the team’s inside linebacker positions alongside his friend and senior linebacker Nick Fletcher. “He has had to learn a lot there in a short amount of time,” Ashcraft said. “Before his injury, he was playing outside linebacker for us but has stepped up since his return to help our team.”


Ashcraft describes White as dependable and recognizes the efforts he made to return to the team. “Logan is someone you know that is going to show up and work hard and have a positive attitude every day. Guys like him are easy to coach because you know he is going to give it his all every day,” he said. “Lots of people lose their fire and motivation after an injury, but it seems that his desire to be successful has risen since his injury. It makes you sick when you see a player get hurt and miss time but it’s been amazing to watch him in his recovery and to see him become a Friday night player for the Wampus Cats.”