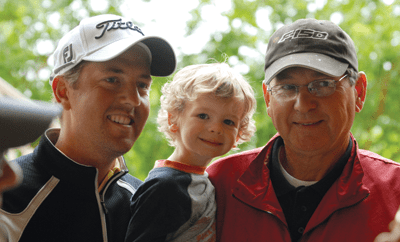 The Kelli Molder Memorial Golf Classic, played at Centennial Valley Golf and Athletic Club, honors big sis and benefits K-Life, an inter-denominational Christian organization for youth in the fifth grade and up.
Bryce Molder knows the influence K-Life can have. He’s seen it firsthand.

“I haven’t been back to the tournament in a while, but I try to make it back as often as I can,” said Molder, who stopped on his way back home to Scottsdale, Ariz., after missing the cut by one stroke at The Players Championship at TPC Sawgrass in Ponte Vedra Beach, Fla.

“Our family is very much tied to this tournament. We moved here in 1992-93, when K-Life was starting in Conway, and my sister passed away in ’93. After that, our neighbors, K-Life, people from our church, were all so instrumental in helping us get through that. That’s the big reason why this is so important to me and my parents.

“This group rallied behind us as they have so many others.”

Molder was playing in a junior tournament in Houston over Easter weekend in 1993 with his parents, Barry and Connie, and sister traveling with him. Unbeknownst to him, Kelli was stricken and hospitalized. When he finished his Sunday round, his parents weren’t waiting on him.

He thought that was unusual, but he was more concerned with the 78 he shot.

But Kelli died that weekend. Bryce was 14.

“To gain that kind of perspective at that age matures you beyond your years,” he said. “God decided to take her at that time, but it doesn’t mean her impact is any less. She lives through me and my parents and anyone else she touched.

“God shows us over and over how important that life was. That’s what’s special about how God works.”

He said her death had forced him to deal with things most 14-year-olds never consider.

They had had the typical big sister-little brother relationship, with a healthy dose of sibling rivalry.

“I was the little brother she beat up,” he said. “She was the cool, pretty older sister, and I was the dorky little brother. She was trying to ‘cool’ me up.”

He recalled that the golf course was the one place she took up for him. If anybody said anything, she’d take care of it, but she’d never let him know. Before the family moved to Conway from Tulsa, she dated another golfer, who once said something uncomplimentary about Bryce.

“She reminded him it had been a while since he’d beaten me,” he said. “Of course, that got back to me through my parents. She’d never admit it to me.”

After the trauma of Kelli’s death, Bryce went on to a stellar golf career at Conway High and was a four-time All-American at Georgia Tech. He also earned academic All-America honors, was named collegiate player of the year twice, reached the quarterfinals of the U.S. Amateur twice and was the low amateur in the 2001 U.S. Open. Based on his amateur success, he was expected to sail onto the PGA Tour and never look back.

But it didn’t happen that way.

Molder turned pro in 2001 and spent time on both the PGA and Nationwide Tours for several years. For the last couple of years, he’s played almost exclusively on the PGA Tour after finishing among the top 25 on the 2008 Nationwide Tour money list. Last year he earned $1,381,211 to finish 63rd on the PGA money list.

“It was like, ‘OK, now you’re in,’” he recalled. “This is the first year I’ve been able to pick my schedule. I’m still trying to figure it out, and even when I’m not playing great, I know this is me. This is who I am and where I’m going to be.”

By his stop in Conway, he had played 13 PGA events in 2010, with four top-10 finishes and $675,020 earned. But he’d missed six cuts, including the previous three. His best-ever PGA finish is a tie for second in the 2009 St. Jude Classic in Memphis. He said he would probably play 16 more events this year with special emphasis on earning his way into the majors. He tied for 43rd in the British Open last year.

“The main thing is I just need to play well,” he said, typically cutting to the chase.

The man has evolved with his game over the course of his professional career.

“It took me a long time to appreciate the challenge of playing the PGA Tour,” he said. “There’s only 75-80 American players. It took me a long time to get comfortable with who I am as a player and as a person. That sounds hokey, but it took a little while for that to take place. But I’m certainly enjoying my opportunities. That’s part of the game and the process. I’m not to the level yet that I can play poorly and beat guys playing their best.”

He’s also not the typical star athlete. He said he thought it was silly that someone would look up to him because he plays golf, but he understands the impact he can have.

“I don’t know that I have that star quality where I’m walking down the street and people recognize me,” he said. “I’m more of a regular guy.”

He also acknowledges that much of the credit for his success goes beyond himself.

“I am very fortunate,” he said. “I have been blessed with an incredible talent. Very little is due to my hard work, and I’m trying to do the best I can with it. I am certainly getting to live my dream.”

Besides a family, he also looks forward to being more philanthropic. He hopes to be able to mold his schedule in order to devote more time to causes.

“The goal is to play well enough to have that time,” he said.

One of those causes will surely be K-Life and his sister’s memory. She didn’t play golf, but he remembers the pair joking, laughing and picking on each other.

He knows Kelli would be proud of him.

“Under her breath, she was proud of me,” he said. “She never showed it at the time, but she was extremely proud of me.”