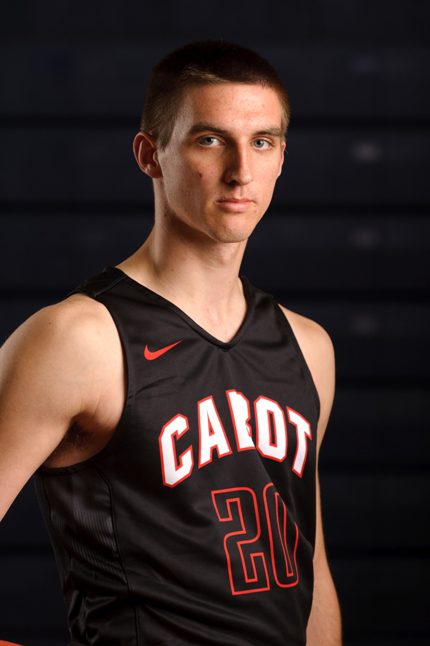 
As the regular season draws to a close, the Cabot Panthers can breathe easy, having locked up the top seed in the Class 7A state tournament. However, despite earning a first-round bye and having home-court advantage during the tournament, you won’t find the Panthers (16-8, 7-5 7A East) taking a game off.


Southerland was selected to this year’s 501 Basketball Team — 35 players representing the best the 501 has to offer both on and off the court. He was nominated by head coach, Jerry Bridges.


“Hunter is an outstanding young man who plays hard all the time,” Bridges wrote in his nomination. “He’s an outstanding shooter with great character and work ethic and a pleasure to coach.”


A three-year starter for Cabot, Southerland has enjoyed great success in his time with the Panthers.


“Last year, I got All State and All Conference,” Southerland said. “We had some injuries last year and only one senior, so I felt like it was my duty to step up and be the player my team needed. After the season was over, our coach came in and told us that there was a player who made All State and All Conference. I was really surprised to hear that it was me. It was a really great moment for me.”


Achieving that level of success only inspired Southerland to try for more in his senior season.


“My goal is for us to make it all the way,” Southerland said. “When I was a sophomore, we made it to the second round of the state tournament but fell short. It’s my last year. This is my last shot and there’s a lot of really good teams out there. Winning the title starts with defense. You have to play hard for 32 minutes every night to get the win, and we’re willing to do whatever it takes to make it happen.”


An underdog victory over a tough opponent gave the Panthers a confidence boost this season.


“We had a big game against Fayetteville,” Southerland said. “At the time, they were the top team in the state. We had a rough start and trailed by as many as 17 points in the third quarter. However, when we came together and turned up our defense, we came back to win the game. It was a big moment for us. It taught us that when we play together, we can play with anyone and I think that other teams look differently at us now because of it.”


Off the court, Southerland is active in his youth group at Pleasant Hill Baptist Church and spends his free time giving back to the youth of the 501.


“In the summer, I help teach basketball to kids in my community,” Southerland said. “When I was younger, I remember looking up to the seniors and wanting to be just like them. Now that I’m a senior, it’s exciting to be someone they look up to. We work on form and ball handling. They’re developing a love for the game at a young age.”


Along with his brother, Garrett, Southerland also shares a passion for music.


“I love music,” Southerland said. “My brother is in a local quartet group called Hallelujah Harmony and sometimes I’ll fill in to sing and play guitar with them. It’s a lot of fun.”


The future is bright for Southerland, who hopes to pursue a childhood dream after high school.


“I’m excited about continuing my education at the next level and possibly playing basketball, too,” Southerland said. “Taking a criminal justice class at Cabot has inspired me to pursue a career in law enforcement. It’s something I always dreamed of as a kid. One day, I’d like to become a U.S. marshal.”


Southerland and the Panthers close out the regular season playing host to Searcy at 6 p.m. Friday.