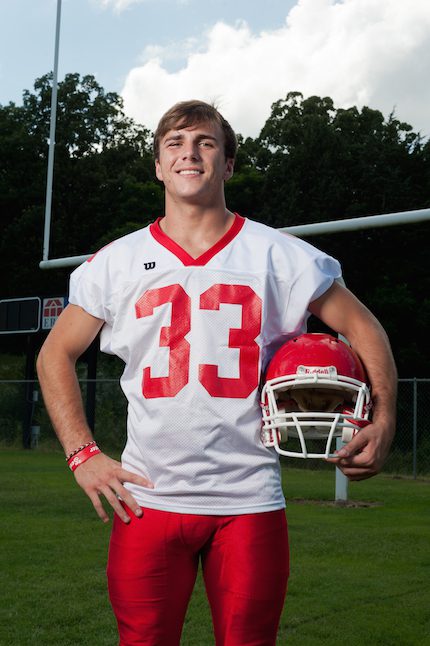 
The Cabot Panthers followed 2013’s historic run with a 6-4 regular season this fall, punching a return ticket to the playoffs.


It’s been a bumpy ride for Jake Ferguson in his final campaign as a Panther. The senior was forced to have knee surgery after Cabot’s game in Week 6.

His final season on the gridiron was cut short, but Ferguson is excited for Cabot’s looming postseason run. The Panthers travel to Fayetteville this week in the first round of the 7A playoffs.


“In order for us to get a win on the road against Fayetteville we will have to come out full strength,” Ferguson said. “We will need to be clicking on all cylinders. We will also have to keep their defense honest by getting a [receiver] out there and slinging it around a little bit.


“On defense we will have to shut down their tight end and contain the quarterback — getting as much pressure on him as possible is crucial. If we do that, we will have a great game on our hands. No mental mistakes will [also] be crucial.”


Ferguson was selected to this year’s 501 Football Team — 24 players representing all 11 counties of the 501. The team boasts the best the 501 has to offer both on and off the field. Ferguson was nominated by Cabot’s head coach, Mike Malham.


“Jacob always plays full speed,” Malham wrote in his nomination in the spring. “He has great football instincts and great anticipation of what is going to happen. Jacob leads by example. He has great work habits at practice.


“Jacob also works hard in the classroom. He carries a 4.0 GPA.”


Although his season hasn’t turned out quite like he expected, Ferguson is staying strong for his team, urging them on from the sideline.

The Panthers are using the experience they gained last year — when they went 12-1 and made it all the way to the 7A final — to help them in this year’s playoff run.


“Last year’s experience in the playoffs showed us that there is no underdog in the playoffs,” Ferguson said. “Every team you will face will be a tough competitor. That being said, never take any opponent you have for granted because the regular season is over and it’s all restarted.


“Every team has the same goal and will do whatever it takes to be state champs. Our previous appearance in the playoffs didn’t end the way we all had hoped for, so it left us hungry and I believe we will surprise a lot of people with our run this year.”


Even in a shortened season, Ferguson still managed to compile 47 tackles at defensive back for the Panthers. He recorded three interceptions, three forced fumbles and two fumble recoveries (with one returned for a 75-yard touchdown). He also returned a punt for an 88-yard touchdown, and at receiver he pulled in 20 receptions for more than 400 yards and had six offensive touchdowns. He has received scholarship offers from Ouachita Baptist and Henderson State, but is still weighing his options.


His injury will keep him from athletics for six more weeks, but Ferguson will be able to play basketball for the Panthers this season.


“Our team has suffered due to some injuries, but our team is all heart and a brotherhood none the less and wants that ring just as bad if not worse than any other team in the state,” Ferguson said. “We are shaping up well heading into the playoffs by putting in extra work every day, watching extra film and fighting adversity day in and day out.”