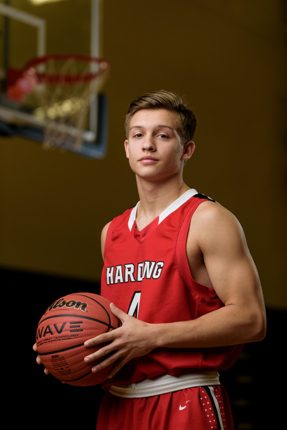 
The Harding Academy Wildcats haven’t won a state championship in basketball since 2012. Senior Brady Palmer is looking to change that this season.


“I’ve had a ball in my hands since before I could walk — even my first word was ball,” Palmer said. “I really just want to make the most of my final season at Harding Academy. I would like to earn all-state honors and a college scholarship to continue my basketball career. Our team goal is to be playing for a state championship at the end of the year, but to also glorify God as we fight to reach that goal.”


Palmer, a senior guard for Harding Academy, was selected for this year’s 501 Basketball Team — 34 players representing the best the 501 has to offer both on and off the court. The team is sponsored by First Security Bank and First Service Bank. Palmer was nominated by his head coach, Brad Francis.


“Brady has good quickness that helps him on both ends of the court,” Francis wrote in his nomination. “He has a complete offensive game in that he is able to hit the 3-point shot, but also has the ability to put the ball on the floor and make the pull-up jumper or finish at the rim. He brings energy to the team both at practice and in the games; he always seems genuinely happy to be coming to the gym.


“Brady has started as a sophomore and a junior. He was our leading scorer last year. I expect Brady to continue to be one of our leading offensive players, but to also help to make his teammates even better.”


“I think our defining moment for our team so far was really closing out the game against Pangburn,” Palmer said. “We really battled all game long and then finally closed out the game and won by 16. Closing out games has been a struggle for us early at times, but in this game we really came together.”


Palmer’s senior campaign has been marked by change as he’s been asked to change roles.


“I have been moved to the point guard position versus the shooting guard spot that I held last year,” Palmer said. “It’s been a pretty smooth transition and one that I have really enjoyed. I have worked very hard to improve my consistency from the 3-point line, and I have improved my percentage to 42 percent. But mainly I am excited about the growth of the team that has been evident in the past few weeks. Things are really coming together.”


Off the court, Palmer is a member of Future Business Leaders of America and National Beta Club. He also helps serve foster families through Fellowship Church and works at a local food bank through New Horizons Church.


“After high school I hope to continue my career at the college level, and then after that I plan on pursuing a coaching career in basketball,” Palmer said.


Harding Academy returns to action Tuesday, Jan. 3, at home against 2-3A foe Riverview.