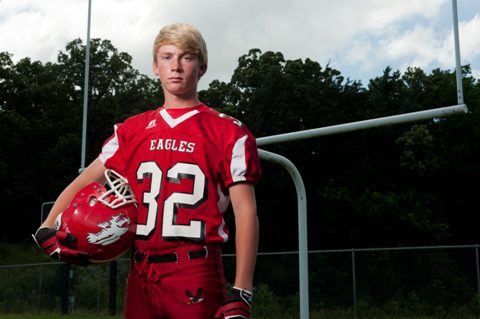 
Marred by injuries in 2013, it was a season that every head coach fears and one the Vilonia Eagles hope to put behind them forever.

“We had a large number of season-ending injuries,” Coach Jim Stanley said. “We lost a total of eight defensive backs and four running backs.”


From concussions to broken legs, the banged-up Eagles managed three wins in 2013. While many injured players recovered from their ailments during the offseason, the setbacks continued for others. Still recovering from a season-ending knee injury a year ago, junior cornerback Brandon Paladino has found a new way to contribute to the team this season — not on the field, but rather, from the sidelines.


“I’ve been doing my best to keep everyone positive,” Paladino said. “I keep telling them ‘don’t quit.’ This year, we’re hoping no one will get hurt and we can move forward and win more games.”


Paladino was selected to this year’s 501 Football Team — 24 players representing all 11 counties of the 501. The team boasts the best the 501 has to offer both on and off the field. Paladino was nominated by Stanley.


“I remember it very well,” Paladino said of the injury. “It was against Alma — I was making a tackle and my foot got caught in the grass and went behind my head. I felt a pop when it happened, but I didn’t really know how serious it was. I just thought that I had dislocated it.”


Unable to play further, Paladino then began the long process of diagnosis, seeing multiple doctors in order to learn the extent of his injuries. 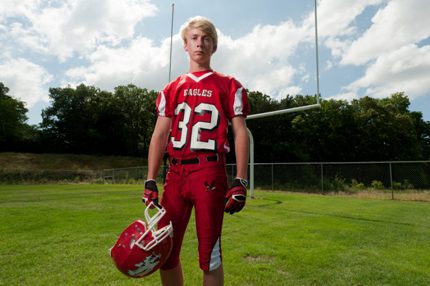 “The first doctor I went to said it was a definite dislocation,” Paladino said. “They said there could also be PCL damage. When I went to a doctor in Conway, they told me everything else.”


His full diagnosis in addition to the dislocated knee — a torn ACL, MCL, PCL and meniscus, injuries that would take nearly a year for Paladino to recover from and keep him off the football field in 2014.


“I had to go to therapy for probably three or four months,” Paladino said. “I relearned to do exercises on my own — weight lifting with my leg and running — just trying to get me stronger.”


The Eagles (3-3, 2-1) have been more competitive this season, with wins over Beebe and 5A West wins over Clarksville and reigning 5A state champion Morrilton. Although his chances of hitting the football field this season may be slim, Paladino has been working hard to stay strong for his team — just in case his number is called.


Following his recovery, Paladino plans to rejoin Vilonia’s football, basketball and track and field teams. In his free time, he enjoys hunting and fishing with friends and is active in the youth group at Friendship Baptist Church in Conway.


“The communities are really supportive here,” Paladino said. “We’ve been through so much in Vilonia and always find ways to pick each other up.”


Vilonia plays at Maumelle, the top team in the 5A West, tomorrow night.