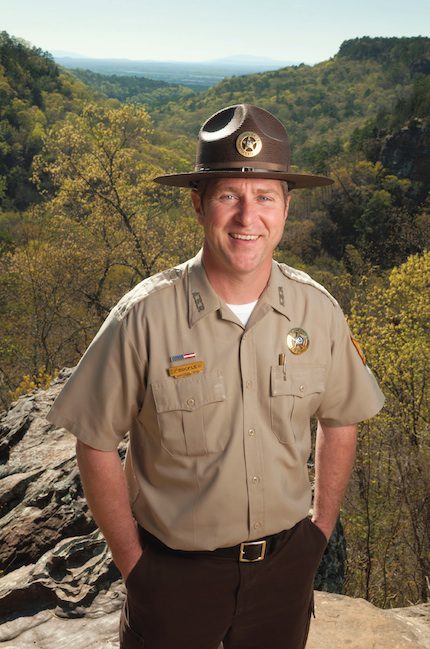 
After falling in the first round of the playoffs a year ago, Heber Springs focused on improving in 2016. However, what the Panthers achieved on the field was much better than expected.

“It’s been a heck of a ride this year,” said senior wide receiver Pierce Mitchum. “We’ve beaten teams that were picked to beat us, and we’re currently one win away from being conference champions — something we haven’t done since 2011. Like every other team, we’re aiming for a state championship.


“With the way the playoff bracket sets up for us, we can go a long way. If we win the conference championship, we’ll have a first-round bye and will play every game at home. There are a lot of challenging teams in Class 4A, but I think we’re as good as those teams or better. We’re ready for whatever comes our way.”


Mitchum was selected to this year’s 501 Football Team — 26 players representing all 11 counties of the 501. The team, sponsored by First Service Bank and First Security Bank, boasts the best the 501 has to offer both on and off the field. Mitchum was nominated by Heber Springs Head Coach Darren Gowen.


“Pierce is a competitor, and his speed and ball skills make him an asset on both sides of the ball,” Gowen wrote in his nomination. “He is an extremely well-rounded young man who is liked by his teachers and his peers. He is courteous, responsible and motivated in class. He is a leader among the best.”


Mitchum’s 2016 campaign began on the sidelines, as the senior watched his teammates take the field against rival Clinton.


“In May, I suffered a torn labrum in my shoulder while pole vaulting,” Mitchum said. “Although it was a bad tear, it could have been much worse. It healed on its own over the summer, and I was able to rejoin the team beginning in Week 2. I feel really good now. It’s been an injury-free year for me, and that’s all that I can ask for.”


After his return to the team, Mitchum made an immediate impact for the Panthers, becoming one of Heber Springs’ top offensive and defensive playmakers.


“Coming back from injury, I feel like I’ve helped my team out in many ways,” Mitchum said. “I’m a vocal player, and I enjoy getting pumped up for games. I love the Friday night lights. I’ve played with these guys since I was young. Working with these guys every day in practice and growing with them since third grade means the world to me, and I can’t be happier to be on this team.”


Mitchum’s injury was not the first time the senior has faced adversity. In fact, he’s dealt with personal challenges for most of his life.


“I’ve been hearing impaired since I was 3 years old,” Mitchum said. “As a result, it’s been tough for me to hear the calls while I’m on the field. Thankfully, my team has accommodated me by giving me hand signals. It helps me a lot. My disability has been a challenge for me, but I’ve never let it slow me down. I’ve learned to read lips and look my coach in the eye. If I look him in the eye I can hear every word he says.”


“I made the game-winning interception,” Mitchum said. “It was an emotional game for our team. We knew that it would most likely be a battle for the conference title. I remember crying afterward. I gave that game everything I had and left it all on the field. It was my biggest moment of the year.”


Aside from football, the multi-sport Mitchum plays center field for Panthers baseball and has won consecutive state championships with Heber Springs’ track and field team. In the spring, the senior is even considering joining the bowling team.


“I thank God for giving me the athletic ability that I have,” Mitchum said. “I want to thank my parents for being there for me every step of the way and pushing me to be the best person and athlete I can be.”


“Pierce is a special athlete, but he is an even better young man,” Gowen wrote. “He dedicates many Saturdays each fall to working with Heber Springs’ youth football program. From coaching to concessions, the young athletes love to be with him because of his patience and encouragement.”


Off the field, Mitchum is a member of Beta Club and FCCLA at Heber Springs High School. In his community, he volunteers his time feeding the homeless and teaching the youth of the 501 about God.


“I’m a part of Young Life, which is a church group made up of mostly football players,” Mitchum said. “It’s a great way for people to come together, play fun games and learn about God. I’d recommend it to anyone.”


The future is bright for Mitchum, who committed to Arkansas State University in May to play baseball.


“I’ve played baseball ever since I could hold a bat,” Mitchum said. “It was a great honor for me to commit to Arkansas State. Because of this opportunity, I can continue toward my dream of becoming a professional baseball player.”