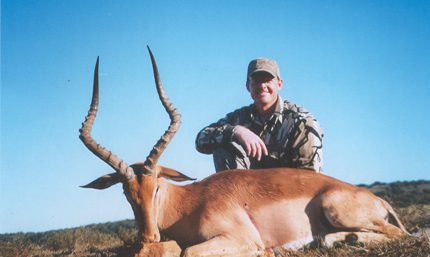 For many of us, a few days each year at deer camp with the guys is considered an adventure. Some of us even endeavor to other locales in the U.S. to hunt elk, mule deer or even moose. As fun as these trips are, it isn’t enough for Conway resident Curt Pelot.

A few years ago, Curt got a call from his brother, Eric, with an opportunity to go on a safari in South Africa, and that’s where this adventure begins. Growing up in Wisconsin, Curt had hunted for whitetail deer as long as he could remember, but an opportunity to pursue big game in Africa was too much of a temptation to pass up. I’m sure he could already picture the massive Kudu or some other exotic creature hanging on his wall.

Once the decision to go had been made, he then had to make the financial commitment because a trip like this can be very straining on the bank account. The brothers and a few other friends booked their trip with JohnX Safaris, an outfitter in South Africa, and started making installment payments two years before the trip.

After months of preparation, the time finally arrived. After what seemed like countless hours in the air, the team finally reached its destination. A good meal and a day spent resting and re-sighting their rifles was needed before the hunt began. Curt had a long wish list of animals he hoped to bag and relied on his P.H. (Professional Hunter) Scott and his tracker Wandila to help him find them.

Hunting in Africa isn’t like hunting on your grandpa’s 100 acres where you most likely won’t get lost or eaten. With more than 3 million acres available, each hunter in the group was paired with their own P.H. and tracker. Their job is to not only help you find the prey, but to keep you from becoming the prey.

At the top of Curt’s list was the majestic Kudu, an animal weighing 600 pounds and with antlers up to 6 feet long. Traveling in the open-top safari truck like we’ve all seen on television, Curt, Scott and Wandila set out across the African wilderness.

Scott’s amazing ability to spot prey at what seemed like a mile away was a valuable skill. Curt found it difficult to spot the same animals with binoculars because the animals’ natural camouflage disguised them so well.

Kudu were spotted and the stalk began. The three-man team headed out on foot to try to get within shooting range. Curt brought both his Hoyt Viper Tec XT1000 bow and his Remington 270 rifle and would use either depending on just how close they could get. For those of us that bow hunt, taking an animal like this with a bow would not only be the hunting thrill of a lifetime but would also hold some bragging rights that would be talked about for many years to come.

Scott had gotten them within 800 yards on an opposing hillside. Unless you’re a trained sniper, this is still an impractical and most likely unethical shot. They began working their way down the hill toward the Kudu and managed to reduce the distance by about half when they lost sight of them because of the terrain. They left one man in visual range who would guide the others closer as one man would run back and forth reporting positions. They reached 300 yards and decided it may be the best position to get their shot. The Kudu were bedded down, so Wandila was sent to flank them and hopefully get them on their feet and moving toward Curt. The animals weren’t easily spooked and Wandila was able to get to about 50 yards before they finally stirred. As the Kudu began walking down the hill, one of them presented a shot that Curt couldn’t pass up, and he harvested the animal with his 270 rifle.

After the adrenaline subsided, the team realized that now they had to get the animal back to camp. Scott began the five-mile trek back to the truck and left Curt and Wandila to protect their kill. As darkness approached, Curt began to think about those predators we talked about earlier. He quickly took the extra rifle and made ready for whatever might come their way. Fortunately, Scott returned with a handful of local ranch hands before any other predators came to stake their claim on the kill.

Because the locals don’t waste a single portion of the animal, they didn’t field dress the Kudu, which would have reduced the weight. Instead, the used long poles to lift the animal. They then carried the Kudu all the way back to the truck. Unfortunately, because the animal was recovered after dark, a print worthy photo was unavailable.

This was definitely the journey of a lifetime for this hunter. Curt is a longtime employee of Green Bay Packaging in Morrilton and lives in Conway with his wife, Sherry, and son, Eli Davis.

For more info on the location of this adventure, check out the JohnX Safari website at johnxsafaris.com.