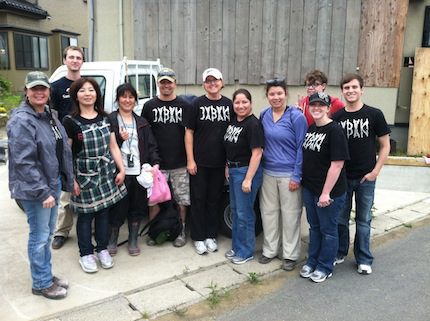 
More than 400 individuals were sent on recent mission trips from New Life Church to Africa, Russia, Mexico, Peru, Mozambique, Haiti and China – with a team of six to Ishinomaki, Japan, to help with tsunami relief.

The Japan team consisted of Melanie Goss, Angela McKenzie, Ryan Bogan, Lacy Jameson, and Brent and Sandy Ahne. Each one had their own personal motivation for choosing to go on this trip, but the overall reason was to love and serve the people of Japan. We just wanted to be the hands and feet of Jesus.


Even after a year of cleanup, there was still so much devastation everywhere. Piles and piles of rubble were along the roadsides, with cars piled up three high. We were told they would not destroy any homes or cars unless the owner came to claim them, but with a loss around Ishinomaki of 7,000 lives, some would never be claimed.


Our team worked with ReachGlobal and Samaritan’s Purse. ReachGlobal is the international arm of the EFCA (Evangelical Free Church of America), existing to multiply healthy churches among all people for the glory of God.


Samaritan’s Purse is a non-denominational evangelical Christian humanitarian organization that works worldwide to assist people in physical need alongside their Christian missionary work. The organization’s president is Franklin Graham, son of Christian evangelist Billy Graham. The name of the organization is based on the New Testament Parable of the Good Samaritan, in which Jesus uses a parable to teach people the second great commandment – how to "love thy neighbor as thyself.”


Samaritan’s Purse works in more than 100 countries around the world. In Japan, they seek out homes that are structurally sound and meet with the homeowners about helping them to rebuild. Our team helped to tear out the ceilings and Sheetrock in the lower floor where there was water damage, then to power wash and bleach to rid the home of the mold. Once the house was ready for the rebuild, it would only take the builders about three weeks to come back in and rebuild the home to its original state.


We were very fortunate to have the home- owner, Kumi, work alongside of us. She shared with us about the day of the tsunami. Her three children were at three different locations. Her oldest son called his mom to tell her he was safe, but when she tried to retrieve her youngest daughter from her school, the waves were coming up behind her and she was not able to get to her. Kumi’s husband lives and works in China, but returned to Japan. It was three days before Kumi knew if her daughter had survived. Thankfully, her whole family was safe. It took 10 days for the water to recede, and then there were dead bodies in streets and cars washed up near their home. It was devastating.


I was told that the fishermen that were at sea had to make the decision whether to try to outrun the tsunami or risk crashing ashore. Many of the ones who stayed out did survive.


When we returned to Conway, our team met to debrief. One thing that we kept repeating was that people would ask us how the trip was and what we did. We would answer them, but when we told them what we physically did or the places we went, it just did not sound on any mission trip as long as it was during like much. This was hard because we wanted the week that I had already requested off to share so much about how amazing it was in June. Was I surprised to see that there and how the Lord worked in and through us but the truth was that we could not explain the things we saw and did while in Japan. It was a God thing and His spirit was leading, guiding and directing our every step. There were 100 little things the Holy Spirit did every day that was so amazing as He laid everything out for us.


We despise crises and especially if it affects could just see that we had His favor. That our economy, yet it’s during these times of severe need that we see God more than ever showing Himself strong. We felt so blessed to have been able to go and serve the people of Japan, and to see the hope that they are experiencing. With less than 1 percent of the Japanese population knowing the Lord, it is our hope that through our service they will see the love of Christ for them.