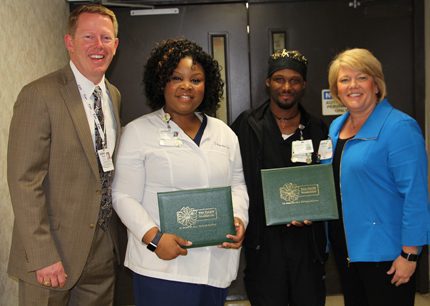 
The awards are part of a national nursing recognition program that honors J. Patrick Barnes, a patient who died from complications of an autoimmune disease in 1999. Ingraham received a DAISY Award which was set up by Barnes’ family as a way of publicly recognizing nurses who show great compassion and provide exemplary care. Collier was awarded the BEE award that extends recognition to non-nursing caregivers who provide exceptional care.


Conway Regional began accepting nominations for the awards in January and the first quarter award recipients.


“It is very appropriate that our first two DAISY and BEE award recipients are such admirable people,” said Angie Longing, RN, chief nursing officer. “Stephanie Ingraham and Patrick Collier are tremendous examples of the mission and values that we want all of our staff to embody. They are richly deserving of these awards.”


The winning nominations were read as part of each employee’s recognition.


“Stephanie exemplifies what it means to be a compassionate and dedicated nurse. I’ve been a nurse for almost five years, and I have never met a nurse quite like Stephanie and I am confident I never will,” her nomination began. Ingraham was nominated for her team work and the compassion she demonstrates to co-workers and patients.


“I thoroughly enjoy working with her because I know that no matter how rough my patient load might be, she’s there to help without me even asking. Recently, I had a patient who was declining and Stephanie was by my side the entire time, helping to make professional decisions about his care. She never left my side until we safely transported him to the appropriate unit. Even after transferring, she was calling the doctor, initiating procedures, etc. for the patient’s new set of nurses. She is hands on with her care and patients really respond well to her.”


The nomination continued, “Another attribute I admire about Stephanie is her compassion for not only patients, but her co-workers. She inspires you to be a better nurse and to be a patient advocate. She steps in when situations are rough and lends a healing hand. All and all, I look up to her as a leader and as a caregiver. She’s honest. She’s reliable. She’s steadfast. She’s accountable. She’s deserving.”


Patrick Collier is known for praying and sometimes even singing to patients in the GI Lab, according to his nomination.


“He offers comfort and hope at times when things seem scary,” the nomination read. Collier is currently working full-time in the GI Lab while attending college. He also has a wife and two young children.


Collier does not forget his co-workers, often personally visiting people to cheer them up if he learns they are having a challenging day.


The nomination continues, “He takes call; he works all the time, yet he never shows the stress on his face or in his voice or actions. He is a gem. If Patrick is needed for anything, he is there and does it with a smile and a song. He is a shining example of God’s love for us.”


The public and employees can currently nominate Conway Regional staff for the second quarter awards. All nominations are confidential and award recipients are chosen based on the patient care story submitted. Nomination forms are available throughout the medical center and at conwayregional.org/daisy-award-nomination-form.