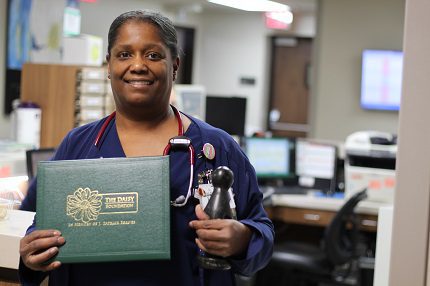 Leisa Green of Plumerville, a registered nurse on 4 South, and Paula Weatherley of Enola, an imaging tech and supervisor of the Cardiac Cath Lab, are recipients of the latest DAISY and BEE awards for exemplary clinical service at Conway Regional Health System.


The awards were presented on Jan. 9.


Conway Regional has been awarding the DAISY (Diseases Attacking the Immune System) and BEE (Being Exceptional Everyday) since January 2017.


Green was awarded the DAISY award, joining past recipients Lisa Speer, RN, Deanna Wicker, RN, and Stephanie Ingraham, RN. The awards are part of a national nursing recognition program that honors J. Patrick Barnes, a patient who died from complications of an autoimmune disease in 1999. The DAISY Award which was set up by Barnes’ family as a way of publicly recognizing nurses who show great compassion and provide exemplary care.


“We are so grateful to have such compassionate and dedicated caregivers as Leisa Green and Paula Weatherley taking care of patients at Conway Regional,” said Angie Longing, RN, Chief Nursing Officer. “These awards are given based on nominations by patients and co-workers. Leisa and Paula’s stories were very compelling and make all of us proud to work alongside them.”


The award nominations were read aloud with both caregivers’ co-workers looking on.


Green was nominated for her award by the daughters of a former patient. Her nomination read, “Leisa has always met us with her incredible smile, tremendous bedside manner and has shown compassion unlike any other…We want to extend our love and appreciation to you for the exceptional care that you gave her at the hospital. We realize that she was abusive toward you, so unlike our mother, but you continued to care for her in spite of that, which shows an exceptional professionalism skill set that sets you apart.”


The nomination continued, “We will forever be grateful for your devotion and compassion for a patient you have cared for in the best of times and worst of times. We are forever indebted to you for the care that you have given to both of our parents over 30 years and have a lovingly special place in our hearts for you, Leisa.” 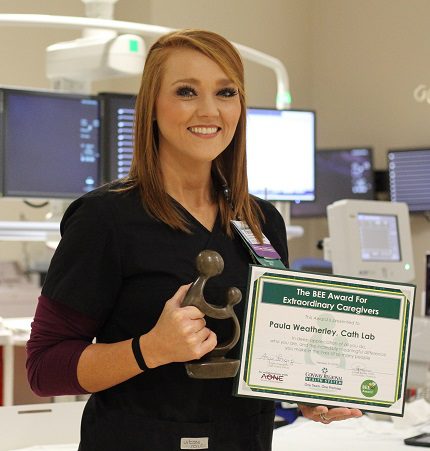 Weatherley was nominated for the BEE award by a co-worker. Her nomination read, “She wears many hats. She not only serves as our supervisor, but she also works full time in the Cath Lab and pulls call, along with the many committees she serves on. I would like to share with you the story of what this very dedicated employee did, as just one of the many examples of our unsung heroes that are here working  very hard day and night to save lives.”


The nomination continued, “This morning, Dec. 8, 2017, at approximately 4:30 a.m,, the Cath Lab staff was called in for an emergency heart attack victim coming by Medflight from Clinton. Paula was on call and coming in for the case when she had a blow out by Ida Burns Elementary School. It was dark and about 30 degrees outside. Paula ran from Ida Burns to the hospital to get here to do the emergency case on this MI patient. If running to your job at 4:30 a.m. in the dark, in the freezing cold, by yourself to get to your patient, doesn’t make you an exemplary employee, I don’t know what does.”


All nominations are confidential and award recipients are chosen based on the patient care story submitted. Nomination forms are available throughout the medical center and also online at conwayregional.org/daisy-award-nomination-form.