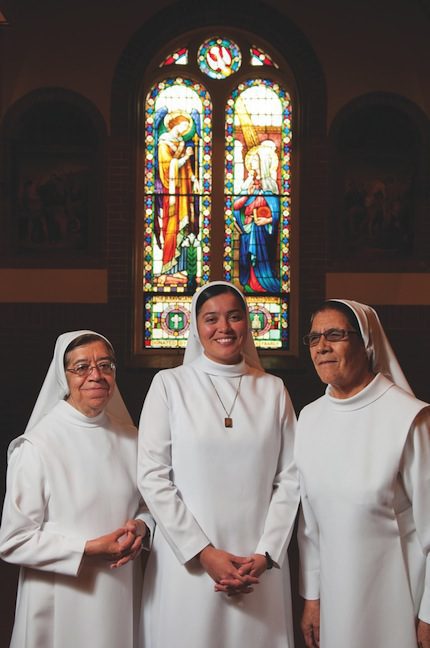 
St. Joseph Parish has nuns in residence for the first time in more than 30 years.

In September, three Carmelite sisters from Holy Family Province in Houston, Texas, moved to Conway at the request of Father John Marconi, St. Joseph’s pastor, to serve the parish’s Hispanic congregation and facilitate its affiliation with the “Anglo” community.


The sisters are still working out exactly how they will accomplish that goal.


“We are here to look at the needs, and once we discover what the needs are, to attend to them,” said Sr. Elsa Maria Miranda.
“The Hispanics need to know the Anglo culture, and the Anglos need to know the Hispanic culture, and they need to value both,” explained Sr. Rosa Elena Perez. Appreciation of each community for the other’s similarities and differences is what the nuns hope to promote.


The Hispanic population in the parish is growing rapidly. Most of Conway’s Hispanics are Mexican, although a few are from Honduras, Guatemala or Panama. The non-Mexicans are somewhat shy because of their differences, the sisters say, and this is something they hope to change.


Although they have been here only two months, the sisters have visited many of the parish’s Hispanics. They’ve also joined both the Hispanic and the “Anglo” Charismatic groups in worship and Bible study.


“It was a praising and worshiping and singing to God in song,” said Sr. Elsa of the Charismatic meetings.


And they have lunched at University of Central Arkansas’ Catholic Campus Ministry.


As it happens, although each joined the Missionary Carmelites of St. Teresa at different times, all of the sisters are from Michoacan in southwestern Mexico. It’s “the most beautiful state in Mexico,” says Sr. Elsa. This is the first time they have lived together.


Sr. Dulce Maria Cordoba has been a nun for 57 years. Although her English is not as good as that of her two sisters, she explained that she became a nun because she wanted to serve God. She looked at the Franciscan and Guadeloupian orders before joining the Carmelites. She said with a smile that she thought the Carmelites’ habits were pretty.


“I wanted to be a missionary,” she said, adding that at the time she thought that meant going to Africa. “Now I understand missionary in a different way.” She said that a missionary attends to souls wherever she is.


Sr. Elsa didn’t go to Africa. But she has been to Sweden, and now she is in the United States.


She, too, looked at other orders, but she chose the Carmelites because “I like the spirituality.” She added that the Carmelites also have a special vocation to pray for priests, and she finds that a very special thing.


Sr. Rosa is the youngest of the three. She joined the Carmelites in 2008 as a postulant and made her first profession last year. But she has wanted to be a nun for a long time.


“I was 8 years old when I first began to think about it,” she said. “I didn’t know what nuns did; I knew what priests did, so I played Mass.”


The process of becoming a nun is lengthy: two years as a postulant, two as a novice and five years between the first and second professions of vocation.


“The experience is very rich,” Sr. Rosa said. “It is very helpful in the discernment process.”


She, too, looked at several orders before choosing the Carmelites. She had doubts when visiting the other orders, she says, but she now knows those doubts were God’s way of leading her to the correct community.


Community is what it’s all about for these women.


“We are going to be saved in community,” Sr. Elsa said.


“We need community to grow in our faith,” Sr. Rosa agreed.


The three say both communities, St. Joseph and Conway, have welcomed them.


“This is one of the best experiences of my life,” said. Sr. Elsa.


“The community has been a blessing for us,” echoed Sr. Rosa


No doubt that goes both ways.