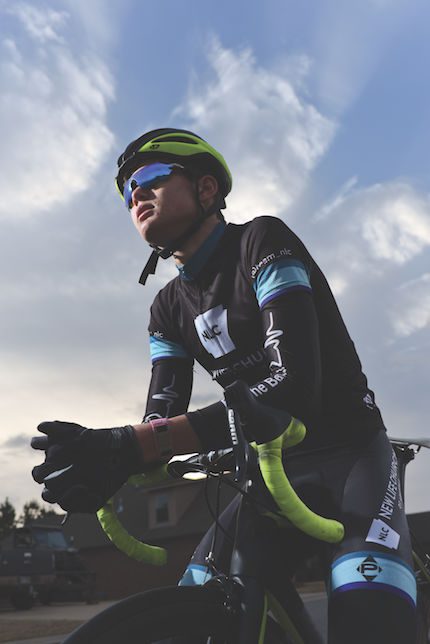 His first go-round, Seth Norton was afraid of bicycles.

Norton, 17, a junior at Conway Christian School, has found his niche and is one of the 501’s upcoming young cyclists. He won his age division in July in the Arkansas State Road Race, sanctioned by USA Cycling, in his debut in that competition.

“I did not like riding bikes until recently,” he said. “I always ran a lot and did a few triathlons, but I’ve been serious for probably two years now.”

His father, Stuart Norton, was a cyclist and triathlete, and a few years ago a friend left her bike with the family when she went on a summer mission trip.

“One day I said, ‘Seth, why don’t you ride with me?’” Stuart Norton remembered. “He reluctantly did, and he liked it. He was keeping up with me and even passing me. That led to me buying him a road bike, and ever since then, I can’t keep up with him.

“Now he has to ride with other guys a lot faster than me.”

Terry Coddington of Conway is one of those.

“We have a mutual friend that I ride with — Steve Pascoe — and Seth showed up with Steve’s son, Bennett, for a ride,” Coddington remembered. “They were just some young junior high kids, just learning. They knew how to ride bikes, but learning how to ride on the highway is a different animal.

“But he got the bug and started showing up at some of the group rides and getting better and better. I’d see him riding around by himself, and we started talking. He expressed an interest in wanting to get better and more competitive.”

So a group of Conway cyclists took him in to mentor.

“I think he’s got a lot of potential,” Coddington said. “(One of the local routes) has a two-and-a-half-mile climb, and we hit that and Seth, no longer than he’s been riding, can climb like a billy goat. He’s got one of the top two or three times on that route.”

What sets him apart?

“He works at it,” Coddington said. “It’s not easy, and it takes some dedication just like any other sport. You don’t get good at it by just a few hours a week. It helps that he’s young and light. It’s all power-to-weight. Seth has a motor, but the other thing that helps is he’s a string bean. Look at his makeup and physical ability and power-to-weight ratio — he’s got all that.

“If he really wants to do it, it’s just a matter of learning the tactics and equipment and stuff like that.”

“I get to push myself and see how far I can make myself go,” he said. “I enjoy the strategy part of it — conserving your energy and determining when you want to break off the front or when to eat, drink, things like that.”

His success last summer at the state race, a 48-miler, whetted his appetite.

“I was really just trying to hang on with the group,” he said. “The course was very tough with a lot of climbing and that kind of stuff. Me and another kid broke off the front.”

He said he planned a fuller competitive schedule in 2016.

“I’m going to start racing in February,” he said.

Stuart Norton said they were planning to race in five or six events, including some possibilities in surrounding states.

“We’re also possibly looking at getting him some coaching as well,” Stuart Norton said. “The bicycle community has been very helpful and supportive of him. He’s done other sports, but this is probably his niche, where he’s good. He’s built for it; he enjoys it.

“The guys tell me he has the potential to do well; I just don’t have an idea. I think we’ll find out this spring.”

Seth Norton said several people had been instrumental in helping him get to this point, including his father and Pascoe, as well as Erik Leamon, Tyler McDonald, Johnny Adams and Brad Walsh, among others.

“Erik (owner of The Ride) allowed me to work in the shop and learn about bikes,” he said. “Mac is the head mechanic at The Ride and has taught me a lot about working on bikes. Mr. Johnny is a friend of my dad’s that I also rode with a lot during my first year of riding, and Brad is someone I rode with (last) summer and spent a lot of time with.”

Seth Norton said his goal for 2016 is to move up in the USA Cycling rankings to Category 3, the middle of five, based on points earned.

Stuart Norton said there were probably only a couple of people in Conway at Category 1.

“That’s semipro, basically, when you’re that level,” he said.

Seth Norton also has an eye on a college scholarship.

“I’d like to get a riding scholarship and see how far I can go,” he said. “A few schools in North Carolina give those, and Midwestern State University in Texas, and there are several in Colorado.”

“Now that could all change,” he said. “As teenagers get older, they discover girls and stuff like that. But if he keeps his focus and if this is what he wants to do, he has it.

“If you think of a pyramid — he has all the bottom stuff. He just needs to work on the top stuff.”