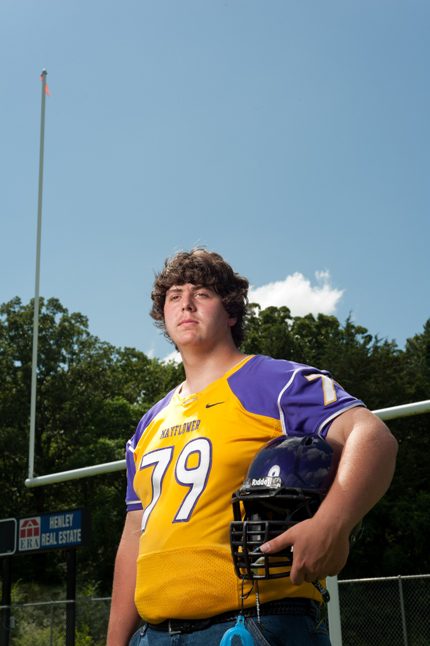 
Just a high school senior, Mayflower’s Riley Norman has already experienced enough hardships to last a lifetime. However, no matter the adversity that life throws his way, the resilient offensive lineman always manages to find optimism in the challenging world around him.

“Riley is a physically gifted offensive lineman, but his best quality may be his toughness,” Mayflower assistant coach Jeff Hill said. “You never see him in a bad mood. It’s just the same ole easy-going, good kid every single day. Everyone truly loves Riley.”


Norman was selected to this year’s 501 Football Team — 24 players representing all 11 counties of the 501. The team boasts the best the 501 has to offer both on and off the field. Norman was nominated by Hill.


“His level-headedness that you see in class is the same thing you see on the football field, with one exception. On the rare occasion where a coach feels like Riley could’ve done slightly better and gets on him about it, he gets pretty worked up. His face turns red, he starts making some weird noises and you know he is about to completely dominate anyone you put in front of him for the next few plays. He finds some adrenaline somewhere, and no one wants to be that scout team player that lines up in front of him.”


A year ago, Norman sustained a broken fibula against Perryville. What would be a season-ending injury for most was but a minor hindrance to the sturdy lineman.


“When I broke my fibula, I thought it was only a sprain, so I taped it up and kept going,” Norman said. “Three games later, my therapist told me I should get an X-ray. Sure enough, my doctor told me that I was playing on a broken leg. He told me that if I could play on it, I might as well keep going, so I taped it back up and hit the field.”


“The doctors told him that because the majority of his weight is carried with the tibia, he could continue to play if he wanted,” Hill said. “He would just have to deal with the pain. He chose to fight through the pain and continue to play. You could tell it was hurting him, but pulling him off of the field was going to hurt him even more. He’d run through a wall for you if you asked him to. He’s a great young man.”


Later in the season, the injury bug bit Norman once more. This time, Norman had no choice but to take time to rest.


“I tore my shoulder labrum against Harding Academy and had to have surgery,” Norman said. “I missed the rest of the year.”


While the offseason offered a chance for his injuries to heal, Norman faced adversity once more: he and his family lost their home and their belongings in April’s devastating tornado that ripped through Mayflower.


“I was inside my house when the tornado hit,” Norman said. “My family was safe, but my house was destroyed. All of our stuff got destroyed. We rented a house in Conway and currently drive back and forth to Mayflower from Conway. Now while going to school and playing football, I’ve had to stay up late moving stuff. It’s been a crazy year.”


Though the tornado destroyed his home, Norman never lost hope. The senior saw the tragedy as an opportunity to rise above and help his community. 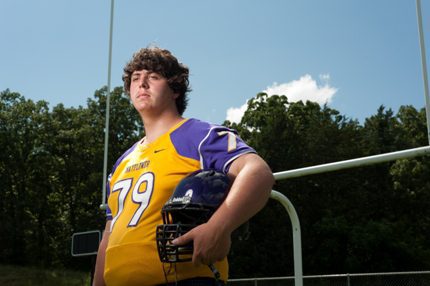 “Riley is all about doing all he can to help those in need,” Hill said. “He has done a wide variety of services with his church, including trash pick-ups, feeding the homeless, cleaning up tornado and flood-damaged homes in the area, singing to the elderly at living centers during the Christmas season and also a multitude of fundraisers. He has also helped build more than 100 bunk beds at Oak Grove High school, where they are building a community center for kids that do not have a home. He has repainted skate parks in Jacksonville. He has fixed more than 70 bicycles so that they can be given to kids that can’t afford to purchase their own. Finally, he has helped cook and serve hamburgers, hot dogs, fish and ice cream to kids in Jacksonville.”


With a new football season under way, Norman returns to the Eagles, fully recuperated, and prepared to step up his game in 2014. With the team off to a 1-2 start, Norman understands the importance of the program to his rebuilding community.


“I’ve been working hard to get bigger and stronger,” Norman said. “I’d like to get to the state championship. It’s my last season, and I have to make it a good one. I love being around my teammates. I just want to have fun and play and win games.”


“I expect Riley to be a dominant offensive lineman for us this year,” Hill said. “[Even injured, he] was a very good lineman. As a junior, Riley had 25 knockdowns and nine pancake blocks. We’re excited to see what he can do as a senior with a clean bill of health.”


“It is an award that is given to the player that most fits what we think a Mayflower Eagle should be in all facets of life,” Hill said. “It goes beyond what Riley does on the football field. We think very highly of Riley around here.”


Off the field, Norman maintains a 3.2 GPA and is active in Fellowship of Christian Athletes and Beta Club at Mayflower High School and attends Oasis Church in Conway.


“Riley’s personality makes him a guy that everyone wants to hang out with,” Hill said. “He’ll never put anyone down. He is someone that every type of kid feels comfortable around. You can count on him to be his normal, reliable self on a daily basis.”


In his free time, the musically inclined Norman also is involved with Conway School of Music and enjoys playing classic rock music with his friends.


“I play a lot of instruments,” Norman said. “I play bass guitar, electric guitar, saxophone —anything really. I love to jam with my friends.”