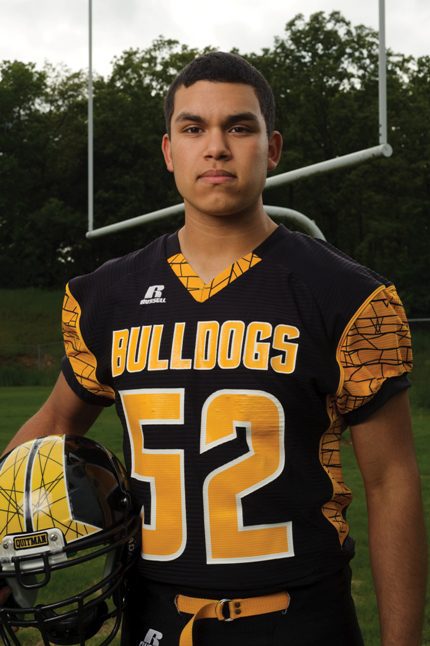 2014 was not kind to the Quitman Bulldogs. Marred by low numbers and injuries to key players, the Bulldogs managed just two wins for the second consecutive season. However, where some may see weakness, junior linebacker and defensive end Abisai Quiroz sees opportunity for improvement.


“Last year was rough, there’s no denying it,” Quiroz said. “On top of having a new coach and a new offense to learn, we had low numbers and a lot of injuries. There was a lot of learning involved for all of us. But this year, we have a lot of players coming back and we’re much stronger than we were a year ago.”


Quiroz is a member of the 2015 501 Football Team — 27 players representing all 11 counties of the 501. The team boasts the best the 501 has to offer both on and off the field. Quiroz was nominated by his coach, Brett Shrable.


“Abisai goes all-out all the time,” Shrable said. “He has great feet and quickness. He is a great player who leads by example and has the kind of work ethic you look for in a player. He is very respectful and a great person to be around.”


After shedding 60 pounds a year ago, Quiroz is expected to shift from left tackle to linebacker and defensive end in 2015 after becoming one of the Bulldogs’ top defensive contributors a year ago. As a sophomore, Quiroz recorded 41 tackles, including two fumble recoveries and eight tackles for loss, earning him second-team all-conference honors.


“I expect Abisai to continue to be a great player and leader for us,” Shrable said. “I expect him to be a first-team all-conference player and in the mix for all-state. With the work that Abisai and his teammates have put in in the weight room, I can’t wait to see them perform on the field.”


“I want to excel at this new position that I’m at this season,” Quiroz said. “I’ve been working hard over the summer to make sure that I’m the best I can be for my team this year.”


Despite an expected lack of depth in 2015, the Bulldogs are focused on achieving the team’s first playoff berth since 2011 — taking each game one at a time in order to get there.


“Coach Shrable tells us to win the game that’s in front of us first and go from there,” Quiroz said. “That’s what we’re planning on doing this year.”


With the new season fast approaching, Quiroz has one particular game circled on his calendar.


“Conway Christian,” Quiroz said. “Last year, I separated my shoulder against the Eagles and it kept me from playing at my best for the remainder of the season. I want a do-over. I want a second chance to get at them.”


Off the field, the defensive-minded Quiroz excels in the classroom, boasting a 4.0 GPA and serving as a tutor and mentor for his teammates.


“Abisai is a straight-A student and tutors his peers,” Shrable said. “He is engaged in learning and wants to be his best in the classroom. He is fun to be around and has a great personality and work ethic that his teammates respect and admire.”


In the community, Quiroz regularly attends Antioch Baptist Church in Conway and volunteers his time training the youth of Quitman’s peewee football program. The junior is also active in Quitman’s Beta Club and throws the discus for the school’s track and field team. After high school, he plans to play football on the collegiate level while pursuing a degree in petroleum engineering.