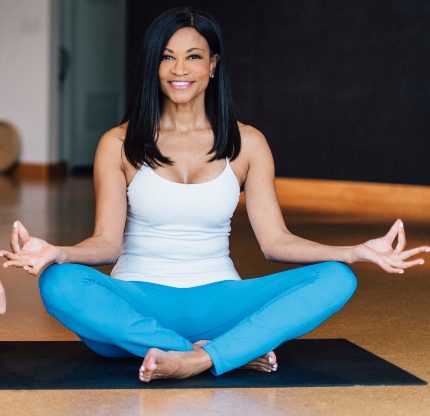 As an Emmy-awarding journalist at Fox 16 in Little Rock, news anchor Donna Terrell knows firsthand that the most powerful and impactful stories are those that evoke emotion drawn from a deep, personal perspective that can put a relatable face on the subject or topic at hand.


That’s why Terrell is on a mission to use her own experience to promote cancer awareness and advocate on behalf of the health benefits of yoga for oncology patients by sharing the story of the daughter she lost to colon cancer in 2011.


“She wanted me to use her as an example,” said Terrell of her daughter, Queah, who was only 27 when she was diagnosed.


“She believed it was imperative to warn young people that colon cancer was not only a disease for older people,” said Terrell. “Even during some of her sickest moments, Queah would tell people – young and old – not to be afraid to get screened.”


Inspired by her daughter’s courageous battle, Terrell – who also lost her mother to cancer – created a special event in 2014 centered on yoga and dedicated to raising funds and awareness for the disease.


“Queah began doing yoga during her illness because it made her feel better,” said Terrell. “Yoga Warriors promotes the practice and brings awareness of early detection for colon and other cancers.”


Since its inception, Donna Terrell’s Yoga Warriors Fighting Colon Cancer has named CARTI as the event’s beneficiary, with proceeds designated to provide liquid nutritional supplements for its cancer patients.


“All patients can benefit from liquid nutritional supplements, but for some it’s a life saver,” explains Terrell. “Thankfully, Yoga Warriors has been able to make it available at no cost for those patients needing financial assistance during their cancer journey.”


Now entering its fourth year, Terrell is hoping to expand the reach of Yoga Warriors by raising enough money to fund an onsite yoga pilot program at CARTI while also continuing to provide complementary liquid nutritional supplements through the CARTI Patient Resource Center.


“Oncology research indicates that yoga can sometimes be helpful in relieving some of the stress and symptoms associated with some cancers and treatment,” said Terrell.


According to Terrell, recent reports suggest that introducing common tenets of yoga – such as meditation, relaxation and concentration – not only can improve the overall mood, health and well-being of patients, but it can also help alleviate symptoms of such chronic diseases as arthritis, heart disease, lupus and diabetes.


“We’re all in this fight together,” said Terrell.  “And, in my heart, I know Queah would be thrilled that we’re making a difference.”


Donna Terrell’s Yoga Warriors Fighting Colon Cancer is scheduled for 10 a.m. Saturday, April 1, at the Doubletree Hotel in Downtown Little Rock. The event will begin with a presentation and raffle sales, with yoga starting around 10:20 a.m. Admission is free, and participants are asked to bring their own yoga mats.


Donations will be accepted, with all proceeds to pay for CARTI patients’ and caregivers’ yoga classes, which will begin in the fall, and for nutritional supplements for those CARTI patients in need.