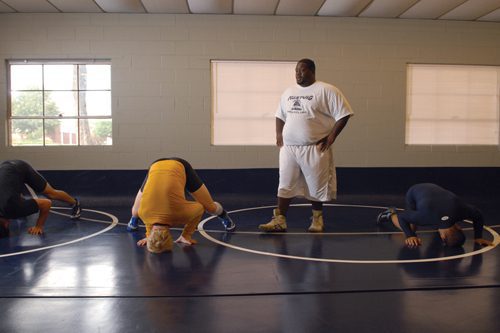 “As soon as I got here, I was accepted with open arms from the people in the community and the school,” said Prophete, who earned All-America honors as a freshman wrestler at Elsworth Community College in Iowa Falls, Iowa. “We’ve had tremendous support, more than I expected, really. I’m still feeling all the love around me.”

Fifteen wrestlers make up the Mustangs’ inaugural wrestling roster. All are freshmen or sophomores athletically. They come from Jonesboro, Searcy, Sherwood, Gentry, North Little Rock, Conway and Benton in-state and from Florida, Ohio, North Carolina and Missouri outside Arkansas.

“We’re a young team, and they have a lot to learn, but the thing I’m more excited about and the thing that clicked immediately is the concept of being a family,” Prophete said. “I didn’t preach it; they started it.

“I figured there would be a lot of ego since we’ve got guys with high experience and guys with low experience, but they all came together. The team chemistry came together quicker than I thought. A lot is that support from the campus and the community. I told them they’re role models, so they have to go out and tell their story and get people excited.”

That doesn’t seem to be too difficult.

“Everybody’s real excited to be starting a new program,” said Laden Conley, a freshman from Jonesboro.

Prophete has the background and experience to lead the young CBC program. An undefeated state champion at Palm Beach Gardens (Fla.) High School, he finished fourth in the national junior college tournament as a freshman at Elsworth. As a sophomore, he finished one point short of repeating as an All-American.

After earning his associate of arts degree, he transferred to the University of the Cumberlands in Williamsburg, Ky. As a junior, he lost his final match by a takedown to finish one match short of another All-America season. After a redshirt year, a knee injury ended his wrestling career, but it sparked an interest in coaching.

He stayed at Cumberlands as a graduate assistant for three years, finishing his bachelor of science degree in biology and public health and a master of arts in teaching public health.
Along the way, his plans for medical school morphed into coaching. At Cumberlands, he was involved in recruiting, coaching and training 10 All-Americans and two NAIA national champions.

What attracted him to CBC?

“The simple fact that wrestling is so new, not just at the college level but also at the high school level,” he said. “Wrestling has a lot of growing to do (at CBC). And the fact that they’re so energetic about knowing more about wrestling. The whole state is looking to increase their knowledge of wrestling.

“Off the mat is important to me,” he said. “We’re going to be going out and speaking with students in elementary, middle and secondary schools to promote CBC wrestling. They’re excited about that.”

“Family” is a word that crops up often with the Mustangs. Conley said within the first week of the team’s arrival, all the Mustangs were friends.

John Lopez, a redshirt freshman, followed Prophete from Cumberlands. He’s known his coach since he was a freshman in high school.

“He told me last spring he was going for this job in Arkansas,” Lopez said. “I told him, Coach, if you get it, I’m going with you.’ The team transition has gone a lot better than it did at Cumberlands. We’re already a big family right now.”

Brad Burnside, a freshman from Little Rock Central, had planned to join the military before Prophete called him last spring to give him a chance to continue wrestling.

“I love it,” he said. “The strength of the team is we’re really like a family. We’re all from different places. We all miss home, so we’ve all become each other’s family.”

With 11 weight classifications in college wrestling ranging from less than 125 pounds to 285, Prophete’s first recruiting class was concentrated on filling the various classes.

“I would say the difficulty of recruiting was this year,” he said. “After this year, it’s just filling the weight classes. From this point on, recruiting will be easier.”

He and the Mustangs have gotten enthusiastic support from CBC president Dr. Terry Kimbrow and Athletic Director Lyle Middleton. A new wrestling room — a workout facility within Reddin Fieldhouse — was under construction at press time.

“They’re making it happen for us,” Prophete said of Kimbrow and Middleton.

He’s also relied on Jess Wilder, his former coach at Cumberlands, and Dan Harris, athletic director at Baker University in Kansas, as coaching mentors. Wilder is now coaching in a Georgia high school; Harris was assigned to him as a mentor by the National Wrestling Coaches Association.

Frank Santore of Orlando, Fla., the “old man” of the Mustangs at 28 but a sophomore in eligibility, said he expected big things from his young team.

“So many teams out there will have four-year starters, and we’re just a first-time-around program, but we’ve worked so hard,” he said. “I think we’re going to shock a lot of people.”