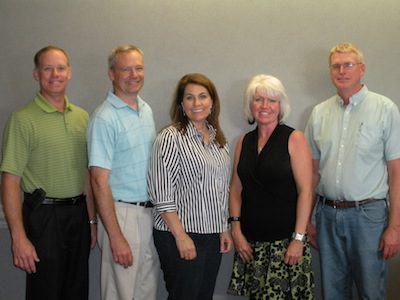 It’s fitting that the most comprehensive history of the St. Joseph Bazaar has been done by four lifelong family friends and members of the Conway spiritual community.

Dr. Robert Hoyt of Bowling Green, Ky.; Al and Mary Hiegel and Carolyn Henze of Conway, all of whom grew up in St. Joseph Catholic Church and graduated from St. Joseph School, are co-authors of the new “St. Joseph School Bazaar 1912-2011: A Lasting Tradition.” The soft cover book contains 208 text pages and more than 160 photographs, sketches and diagrams of the church, school and bazaar and includes a reference section of 72 citations.

“This is going to be a treasure for many families,” said Lori Ross, a member of the bazaar executive committee. “It’s a wonderful piece of history that captures the history of this parish and its hard-working people. I see it as a family treasure, a family heirloom.”

This year would have marked the 100th bazaar had one been held every year since the inaugural one in 1912, but because of the Great Depression, there was no celebration from 1930-32. Technicalities aside, though, the book celebrates one of Conway’s most beloved traditions.

“The fact that any organization has a fundraising event that lasts 100 years is amazing,” said Ross, whose three daughters have been students at the school since preschool.

The project was born in January, Hoyt said, during a nightly “brainstorming” session when the retired Western Kentucky biology professor realized that 2011 would — he thought — mark the 100th bazaar. He contacted the Hiegels and Henze to see if any plans had been made for a book. They knew of none and offered a wealth of primary materials related to their years of experience with the bazaar.

In the preface, Hoyt recalled that the Hiegels asked, “How about you putting it all together if we send you all this material?”

“An invitation like that to a writer is akin to putting a gaming ticket in a gambler’s hand,” Hoyt wrote.

So the Conway residents funneled him information and photographs and became his feet on the ground when he asked specific questions.

“All we did was get him the information,” Mary Hiegel said. “Carolyn had a lot of clippings, like I did. We’ve been packrats, saving stuff for a long time. He’d write something and email it to us to proof.”

Hoyt made two trips to Conway during the process, poring over materials at the Faulkner County Museum and Faulkner County Library. As a research professor, he had written extensively for scientific journals, and he had edited five books and written others, including one on the history of the Conway airport in collaboration with his son Stuart, Al Hiegel and Harrell Clendenin.

“He knows the life of a writer, and I don’t,” Al Hiegel said. “He did all the typing and layout work and put in the pictures, and we just kept feeding him different things day after day after day. When he would need a story on something, like the grotto, we’d try to find out for him.”

Henze said she was “mostly the picture-finder,” and she called on families to see if they had photographs that would help tell the story.

“[Hoyt] sleeps and lives that all the time,” she said. “He could think of stuff we needed in the middle of the night, and we went out and talked to different people involved in the bazaar.”

In the book’s preface, Hoyt recognized “the tremendous volume of materials, encouragement and support” of his co-authors. “Never in any of my sometimes excessive requests for mundane as well as unique information did any of them fail to respond in a congenial and helpful way,” he wrote.

According to the book’s introduction, the bazaar began as a fundraiser to support the academic mission of the St. Joseph School “during extremely trying times.”

What makes this project unique is that because the bazaar wouldn’t have been without the school, which in turn wouldn’t have been without the church, the book offers a history of all three. Chapter 1 offers a short history of the church, and Chapter 2 goes into more detailed history about the school. The rest of the book is about the bazaar from its beginning to 2011.

“The history segments differ from most earlier writings about the church and school in that they are based upon an extensive literature search and contain text citations and a detailed reference section,” Hoyt stated. “Discrepancies in dates and historical accuracy have been corrected where possible with validation references.”

The couple returns to Conway three or four times a year, he said, but has only made two bazaars since living away.

Hoyt stressed he was simply the facilitator for the project.

“The most important people involved are the people of the parish who have been the lifeblood of the bazaar from the beginning,” he said.

Although he lived much of this history, he said he learned a great deal from the project.

“As a student at that school, I always wondered where the early buildings were located, and we resolved that in this book,” Hoyt said. “I always wondered how the church got the property. There were so many myths in the literature, but we got all the deeds and maps straightened out.

“Once I got started, I couldn’t let it go. The story was incomplete at the time I was living it. I remember my maternal grandfather sitting in our house, wanting to talk, but I didn’t know then the questions to ask. He had the answers to all those things I was running around all this spring trying to find out.

“These stories and books need to be compiled by someone now while we still have a living link to those times. It will be very valuable in that regard.”

At press time, the book was at Southern Kentucky Printing with an expected arrival with the bazaar committee on Thursday, July 21.

“I think it’s going to be a wonderful book, a complete book of St. Joseph,” Mary Hiegel said.

Hoyt wrote in the introduction that the authors hope they have written “an accurate history of the church, school and bazaar and identified the sources that led us to the conclusions presented therein.”

And it will provide future generations with an important link to the past.