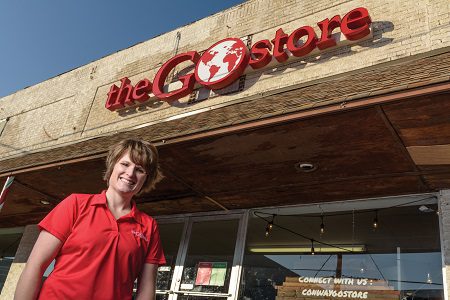 Erica Cason has a heart for missions that she is putting to work in the Conway area that will make it easier for others to help spread the Gospel.

Erica and her husband, Andy, recently opened the Go Store at 807 Court St. in Downtown Conway. The store carries all of the approved items that individuals and groups can purchase and pack in a shoebox for Operation Christmas Child.

The store also has a thrift shop, with proceeds used to support the Go Store and its ministry. The thrift store is an outgrowth of a yard sale that has been held the last three years, with proceeds used for the ministry. It will be stocked with clothing from local consignment stores as well as community donations of housewares, non-upholstered furniture and other goods are being accepted for the thrift store.

Go Store mission: To make quality merchandise more affordable and available to shoebox donors – allowing them to possibly double or triple the number of shoeboxes donated for the same amount of money. We strive to be a place where the community can work together to increase awareness, interest and involvement in Operation Christmas Child – all with the ultimate goal of increasing our impact in sharing God’s love in a tangible way, spreading the Gospel and making disciples of all nations.

Erica and Andy, who began dating in their teenage years, both attended the University of Arkansas in Fayetteville and married while in college.

The couple moved to Conway for Erica to attend physical therapy school at the University of Central Arkansas. They have two small children.

While in college, Erica participated in Operation Christmas Child, which collects shoeboxes filled with gifts that are delivered to children in need around the world. Local churches use the boxes as a tool for evangelism. It is a program of Samaritan’s Purse, which Erica says has a remarkable logistics network.

When they moved to Conway, the family attended Fellowship Bible Church on Hogan Lane in West Conway. “Our church is very involved in it,” she said. The church is the collection center for Operation Christmas Child for this area and also serves as a relay station for boxes collected in a six-county area. National collection week is the third week in November.

The number of items in each box varies, with an average cost of $10 to $15. Erica said those participating are encouraged to include something for the child to wash with, a “wow” item to make them smile and something to wear, even if it’s just underwear or socks. A $9 donation is requested to help cover processing, shipping, material and training for local churches. By making the donation online, the individual is sent a tracking label follow the box to its delivery.

“There are a lot of incredible stories about changes in communities,” Erica said. “It’s probably one of the happiest things the kids have ever experienced,” with an invitation to a 12-week discipleship program and a Bible presented to them at the end. “We’ve heard from the volunteers that they have been praying for a tribe or a village that has been opposed to visitors and violent toward visitors, but when you come in with gifts for their children, who is going to say no. There are so many more open doors because of the box, but the box opens the door to what can happen after that.”

Erica said it feels like a huge risk to trade her PT job with its salary for her non-profit work that is completely run by volunteers with no payment.

She is humbled when she considers her family’s situation in light of the risk taken by volunteers around the world who distribute the boxes. In some instances, they are risking their lives to take the shoeboxes into some areas. “They take them specifically to children in areas that are either very remote and haven’t heard the Gospel. They also send them specifically to refugee situations, people having famine or a lot of them go to orphanages.”

Recently, Erica attended a Samaritan’s Purse conference and met some of the volunteers from the more than 100 countries where boxes are distributed. “They are so passionate about loving their kids and trying to spread that Gospel. They look you in the eye and tell you, ‘We are living in darkness. These people have no hope in their life. This is the first new thing they’ve ever gotten in their lives.”

Erica gets emotional when sharing some of the videos of recipients showing their favorite thing was receiving a toothbrush because they live in an orphanage where they have to share one with others. “It definitely puts a lot of things in perspective for us,” she said. “To give a gift that’s relatively inexpensive and it be such a huge life change for someone, is why we have such a huge heart for this project.”

For the last two years, the group has set up in the Conway Ministry Center but quickly outgrew the space. Erica noted that it was packed when college athletic teams or church youth groups would come to work on shoeboxes and there were some financial considerations on paying rent.

“My husband and I just had this pressed on our hearts to do this,” she said, adding that they funded it out of their pocket to purchase the inventory. “We never have run it to make money off the product very much but just to help people pack more boxes.”

The Go Store provides a “one stop shop,” making it easier and less expensive for those wanting to participate in the shoebox project. “It can be overwhelming, when trying to figure out what to put in and what can’t be put in,” she said. “There are a lot of custom regulations that limit what you can put in.” She added that some countries have rejected or held packages because of one expired tube of toothpaste. “It’s specifically because they don’t want the Gospel getting into their countries.”

Erica said all year the operation has been in storage buildings while organizers explored options for a new location. “This was the only rent we could afford,” she said, adding that it has taken a lot of work to get the space ready to open the store.

Erica serves as the president of a non-profit corporation overseeing the Go Store. “Our favorite Bible verse and what has always kind of stuck out in our mind is Matthew 28:19 – ‘Go tell the nations’ – it’s just been on our hearts. Through Operation Christmas Child is the way that we feel most called to do.”

Erica previously worked the last seven years as a physical therapist at Conway Regional Health System. During that time, she saw patients who are alone and had no social network or opportunity to be involved in the community. She said the vision is to have the store open year-round to provide a way for individuals to plug into a volunteer network, including those who are disabled but who can still help. Among the tasks they can work on are hygiene or pencil school kits for the shoeboxes.

The plan is to also involve patients in local rehabilitation hospitals and nursing home clients.

“The Go Store is a place to help bring more people in to pack shoeboxes and spread the Gospel that way and share the love of Jesus, but it can also be a hub for volunteering.”

Erica said the ministry has grown to include local groups coming together to pack shoe boxes as a fun, bonding activity while doing community service. There is even a friendly “box off” competition started last year among businesses and community groups with a traveling trophy for those which pack the most boxes. Winners were the Central Baptist College Baseball/Soccer Team and Pam McDowell Properties.

While packing shoeboxes is typically a fall activity, Erica said there is the potential for boxes to be put together year-round. She said some individuals and groups will identify a different item each month to purchase and collect for their boxes.

The idea for the Go Store is unique, and organizers have been approached by individuals in other states who want to learn more about it. For more information including store hours, visit the conwaygostore page on Facebook, email conwaygostore@gmail.com or call 870.391.1514.

Groups interested in packing boxes or kits at the Go Store, should also contact Erica. Donations are also being accepted.

Recognizing “we are called to be all in,” Erica said the project is not something that can just be done a few months out of the year. “It has such a potential to be life-changing for a whole lot of people in the community. We felt like we were being called to go for it,” she said, adding that they have a lot of support for the effort. She said when a need has come up, it has been met. “Watching that stuff happen over and over, you definitely know it is in God’s hands. It feels very out of our control but in a good way and the way it is supposed to.”