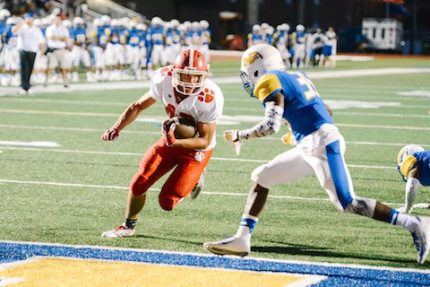 
Hungry for their first state championship since 2000, the Cabot Panthers roar into the Class 7A playoffs with a perfect 10-0 record in 2015. According to senior fullback Kolton Eads, the key to the Panthers’ success is to keep moving forward.


“My favorite football memory is the first long rushing touchdown of my career,” Eads said. “It was against Lake Hamilton. On the first play of the game, I ran 65 yards for the score. It was a rush — something I always dreamed of doing. The whole time I was running, the only thing going through my wind was ‘am I going to get caught?’ All I knew was that I had to keep running as fast as I can. I had to keep moving forward and never look back. That touchdown — that moment — changed the way I viewed the game.”


Eads was selected to this year’s 501 Football Team — 27 players representing all 11 counties of the 501. The team boasts the best the 501 has to offer both on and off the field. Eads was nominated by Cabot head coach Michael Malham.


“Kolton leads by example,” Malham wrote in his nomination. “He plays aggressively, but also by the rules. His work ethic is fantastic. When he’s not carrying the ball, he works just as hard as he does when he is carrying the ball. He’s a great blocker, too.”


The Panthers, who were eliminated in the first round of the playoffs a year ago, have their eyes on the big prize this year. Fresh off of a first round bye, Eads says the team is rested and ready to make a deep run.


“We got tripped up against Fayetteville last year,” Eads said. “But we’ve proven that we’re better this year. Coach Malham told us to forget about last year — don’t look back. He thinks that we’ll make it to the state championship this season. Honestly, if we’re not playing at War Memorial stadium this year, then we didn’t try hard enough.”


Winners of their second 7A/6A East title in three years, the Panthers are also trying to accomplish a rare feat — completing the perfect season. Though he has played an instrumental part in his team’s success this season, the unselfish Eads gives credit to his teammates.


“I have to give a lot of credit to our junior quarterback, Jarrod Barnes,” Eads said. “He’s a great passing quarterback who knows how to run the ball, too. Our offensive line always makes good blocks, too. We have great chemistry together.”


Off the field, Eads is a member of Fellowship of Christian Athletes and devotes his free time to picking up trash in his community and visiting the elderly.


“I want to continue playing football at the college level,” Eads said. “But if it doesn’t work out, I’d like to attend Arkansas State University or UCA to pursue becoming a wildlife officer for the Arkansas Game and Fish Commission.”


Cabot plays host to Fort Smith Southside at 7 p.m. Friday in the 7A Quarterfinals.