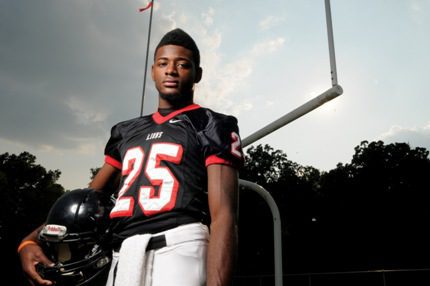 
The Searcy Lions are embracing some new philosophies this fall under new head coach Jeromy Poole, and Karonce Higgins is welcoming them with open arms.

Higgins, a senior receiver for the Lions and a member of this year’s 501 Football Team, is benefitting on the field from the Lions’ new fast-paced offense.


Higgins and the Lions are out to a 1-1 start this season and are preparing to play host to Morrilton this Friday in their last non-conference matchup. Higgins is one of 16 student-athletes selected to the 501 Football Team, which is made up of players nominated equally for their on-the-field and off-the-field qualities.


“Karonce has good size, is very athletic, has great hands and is a physical player and great teammate,” said former Searcy Coach Mike McCain, who nominated Higgins in the spring. “He’s a good student, liked by the administration and his peers and displays great character and integrity in everything he does.


“He played and contributed on both sides of the ball last season and was an all-conference player. He will be a playmaker.”


In addition to playing receiver, Higgins also sees time at defensive back. But his contributions to Searcy extend well beyond just on the field.


“Karonce was recently involved in a community project with Valley Baptist Church Youth during their annual D-Now Weekend,” McCain said in the spring. “The project consisted of raking leaves and assisting the elderly. He is always positive in all situations. I can’t remember hearing a negative word come out of his mouth in the five years I have known him. He is very unselfish and loves to encourage his teammates and loves to see them succeed.


Higgins has had a love for football since an early age. He moved to Searcy after the sixth grade, but his passion for football had been established long before that.


“I came from a small town, Marion, and football is a big thing there,” Higgins said. “So I just always wanted to play football.”


The Lions faced a tough transition to the 7A/6A East in 2012, facing the likes of North Little Rock and Cabot, but Searcy took care of business against Little Rock Central, Mountain Home, Marion and West Memphis to earn a trip to the playoffs.


The fun didn’t stop there as the Lions snuck past Siloam Springs in the first round, 49-48. The Lions’ season came to an end in the quarterfinals the next week at El Dorado.


Higgins is still riding high off last season’s success and has even bigger goals this fall.


“My goals are to not drop a pass, help my teammates achieve our goals and just be a good person to everyone who’s playing,” Higgins said. “We want to go all the way, win it all and never give up.”