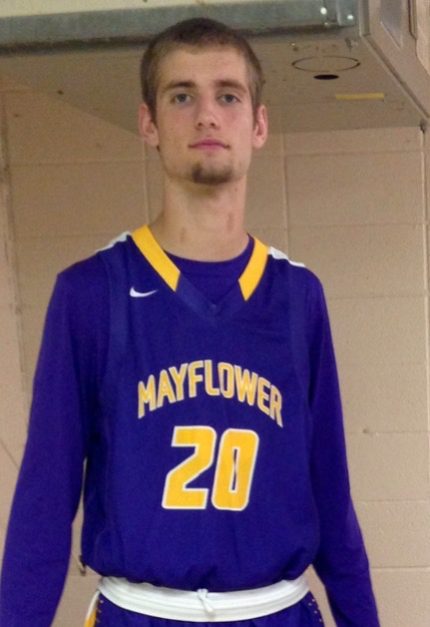 
A year ago, a senior-laden Mayflower Eagles basketball team enjoyed major success before falling to conference-rival Episcopal Collegiate in the Class 3A title game, 57-40.


This year, however, the Eagles (2-16, 1-7 5-3A) have struggled to replicate last year’s achievements. Currently riding a seven-game losing streak, the Eagles continue to work toward establishing their identity on the court. There to assist in the transition is senior power forward J.W. Estes.


“This is unfamiliar territory for us,” Estes said. “It’s been a tough year and we’ve struggled to win games. However, with each and every game, we’re trying to become a better team. We’re always improving — moving the ball better and playing better defense are our top priorities right now.”


Estes was selected to this year’s 501 Basketball Team — 35 players representing the best the 501 has to offer both on and off the court. He was nominated by his head coach, Brent Stallings.


“J.W. leads our team both vocally and with effort and always encourages his teammates,” Stallings wrote in his nomination. “Offensively, he is a very good 3-point shooter who has also developed a good pull-up jumper. Defensively, he has the ability to block and alter shots, rebound and deflect passes with active hands.”


As one of the Eagles’ biggest leaders, the 6-foot-5 senior has commanded a large task — keeping his team’s spirits lifted during a season of adversity.


“This year, J.W. has had to step up and take on the leadership role that last year’s seniors occupied,” Stallings wrote. “He has had to do that both statistically and with effort and encouragement.”


“Win or lose, I’m always trying to keep everyone’s head in the game,” Estes said. “Our record can be discouraging, but as a senior, I have a responsibility to motivate the team. I’m always telling them to keep their heads up and to never give up.”


Estes’ advice — to never give up — was the same advice that helped the senior through a personal challenge of his own — one that nearly ended his basketball career. “A few years ago, I hurt my ankle in a bike wreck,” Estes said. “I couldn’t move it. The doctors said it was a bad sprain and I had to wear a boot for six weeks. Ever since my injury, it’s never been the same. Even today, I’m unable to run at full speed.”


With a less-than-full recovery, the injury caused Estes to give up the game he loved for a number of years. However, after a lengthy absence and some personal soul searching, Estes decided it was time to give the sport he loves another chance.


“I missed playing,” Estes said. “I missed the competitiveness. I decided that I wasn’t ready to give up on the game. I had to give it another shot. Sure, my injury affects me on the court, but I do my best to push through it. Although running too much can be painful, I’m still able to jump and do other things to help my team.”


Despite the team’s record, Estes says the Eagles still have many things to look forward to this season.


“We’re excited about playing Episcopal Collegiate again,” Estes said. “They’re our biggest rival. When we played earlier this season, we were projected to be blown out. However, we went out there, played hard and stayed right with them the whole game. Although we lost by six points, it was the closest we’ve come to beating them in two years. That was our defining moment as a team. It motivated us and made us hungry for more. We all remember what happened in the finals last year. As a team, we’re very excited to get another chance at them.”


Earlier this season, Estes experienced a moment on the court that most players only dream of.


“A few weeks ago, we were trailing to Star City by three points with three seconds to go,” Estes said. “My team trusted me enough to take the final shot and I hit the game-tying 3-pointer to send the game into overtime. It was amazing — my greatest moment on the court. We ended up winning the game by two points in overtime.”


Off the court, Estes plays wide receiver for Mayflower football, which reached the first round of the Class 3A state playoffs in 2015. In his free time, he and his teammates volunteer their time giving back to the youth of the 501.


“My friends and I like to play basketball together at the McGee Center or the Don Owen Sports Complex in Conway,” Estes said. “If there are younger kids there, we’ll help teach them how to shoot. We’ve even refereed a few of their games.”


In the classroom, Estes is often seen helping his peers with schoolwork.


“J.W. sets a good example for our student body,” Stallings wrote. “He enjoys getting involved and supporting his fellow classmates and helps with work that classmates may not understand.”


After high school, the senior plans to attend college and pursue a degree in coaching basketball, a career goal influenced by one of his biggest basketball role models.


“My uncle, Billy Rider, is my biggest inspiration,” Estes said. “He’s taught me everything I need to know about the game. He is always showing me ways to get better and giving me advice on what I can do to help my team improve. I hope to be able to spread that knowledge to as many players as I can one day.”