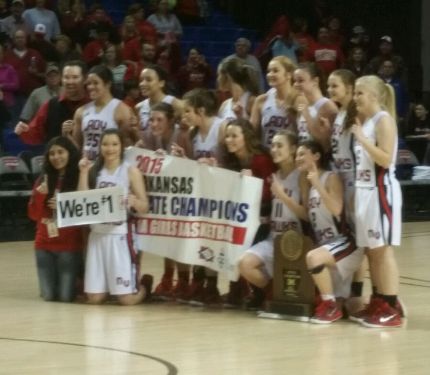 
In a defensive battle, the Nemo Vista Lady Red Hawks accomplished one of the hardest things to do in sports — repeat as champions. The Lady Red Hawks held off conference and county rival Wonderview to win a second-consecutive 1A championship, 32-30, last week at Summit Arena in Hot Springs.

Nemo Vista led by five points until Wonderview closed the gap to 32-30 with a 3-pointer with 2:27 left in the game. But that score and two-point Nemo Vista lead held for the remainder of the game. And it was a long two-and-a-half minutes for fans and players of both teams.


“It was a back and forth game from the second quarter until the final buzzer with several lead changes and ties,” said Kyle Payne, Nemo Vista’s head coach. “It just came down to who was ahead when time ran out. I think the biggest thing for our team was being able to overcome Wonderview’s quick start when they went up 8-2 in the first two minutes of the game. Defensively, holding them to three points over the next 14 minutes until halftime was crucial to giving us a chance in the second half.”


“I have been blessed to be a part of a great community and team,” Thompson said. “Winning back-to-back state championships is even more rewarding when you do it with your best friends. With me being the only senior on this year’s team, I believe the sky is the limit for that special group of girls for years to come.”


Thompson was a member of this year’s 501 Basketball Team. She was joined on the team by Wonderview’s Ali Harris. The last two 1A championship games have been a much different experience for Harris, but she reflects on these years with a positive outlook.


“I will always think of how successful my ball team was,” Harris said. “When we would be going through a slump, we always found a way to overcome it. I made some great friends this year from my ball team, and I wouldn’t trade the memories I’ve made for anything.


“We’ve had a great run our whole career and really pushed each other to become our best. Our seniors were great leaders, but there will also be great senior leaders next year for the team. Wonderview’s girls basketball team has a real good chance of having another state championship in the next three to four years. All the girls get in the gym and push themselves as hard as they can to be the best they can be. We’ve got a great line of talent. The girls definitely have a good chance of making more history at Wonderview.”


Wonderview’s head coach, Jeremy Simon, had nothing but praise for his exiting senior and is optimistic about Wonderview’s future.


“I had seven seniors this year and they have all played together since they were in third grade,” Simon said. “They have been a part of 134 wins, 12 state tournament wins, three state finals and one state championship. This group of seniors raised the bar for our program.


“The future looks bright here at Wonderview. Our junior girls program has only lost six games the past three years, which included a 27-0 season this past year. I am excited to get started with next year’s team. It will include some players that haven’t seen the floor much this past year, but if they work hard enough between now and October, they can pick up where these seniors left off.”


For Nemo Vista, a program that is now 2-0 in state championship games — with both wins coming in the last two years — it’s hard to describe what this run has been like.


“I don’t think you can put into words the past two seasons and do it justice,” Payne said. “It is simply amazing what this group has been able to accomplish through hard work, dedication and love of this game. We only had one senior on the team this year, Kassidy Thompson. Kassidy has been through it all. Three years ago when she was going into the 10th grade, there was a possibility of not even having a senior girls team a Nemo Vista due to not having enough players. A few students decided to play that had not played since fourth and fifth grade, and we decided to move three ninth graders up to senior high off of the junior high team.


“Needless to say, we struggled that year and Kassidy was asked to do more than she ever had in her career. I believe that made her into the player she eventually became this year. She experienced what is like to lose almost every night we stepped onto the court to winning back-to-back state championships. I hope her determination and work ethic reflect on the younger kids here at Nemo Vista in the future to prove to them that hard work will eventually pay off.”


For Nemo Vista, the focus won’t be on rebuilding next season; rather Coach Kyle Payne and crew will work on keeping the train chugging along.


“We are returning six players who played significant minutes in this year’s championship run — Jacie Andrews, Alli Brown, Chase Paladino, Sade Harrison, Maggie Mahan and Adrianna Munoz,” Payne said. “Other players returning include Kayleigh Johnson, Kristen Anderson, Amber Davenport, Lynnlee Bryant and Candace Gottsponer. The sky is the limit next year. Sure, we are going to have high expectations and the ultimate goal of returning to the state championship game with a chance to defend again. There are several factors that could play into that happening or not happening that are out of our control.


“Our focus will be on not becoming content with what we have already accomplished but focusing on what we could still accomplish ahead of us. We will have the mentality to become the best team we can become by the postseason next year, and what happens after that happens. This team will be challenged again next year to become the best they can be day in and day out in practice, and they will have to prove that on game nights as I am working on a very difficult non-conference schedule that will include games versus teams in the top of every classification in Arkansas.”

Originally from Johnson County, Levi Gilbert now calls Conway home. A 2010 graduate of the University of Central Arkansas, Levi became in
volved with 501 LIFE in its early days and now serves as the magazine’s associate editor. He and his wife, Brittany, have two sons. Follow Levi on Twitter for more local 501 stories. Send him story ideas at [email protected].