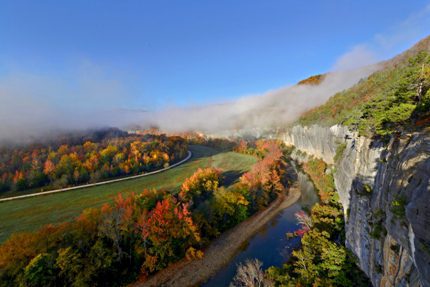 “There is nothing so American as our national parks…” – Franklin D. Roosevelt


January kicks off a year-long celebration of the National Park Service and its centennial anniversary as natural areas, historic monuments and other sites across the U.S. prepare to celebrate the occasion, which officially takes place Aug. 25.


Arkansas is also home to one of the National Park Service’s official ambassadors for the centennial, Enimini Ekong, chief of interpretation and education at Central High School National Historic Site in Little Rock. Ekong is one of only five park rangers out of the 28,000 employees in the National Park Service to be given this designation. As a part of his duties, Ekong will travel the country promoting Arkansas’s and all national parks at events such as the Rose Bowl Parade, the Superbowl and more. He is determined to help Arkansans better understand the treasures that lie in their own backyards.


“Our goal is to create the next generation of supporters, visitors and advocates of our parks for the next 100 years,” says Ekong.


Ekong believes the centennial activities are the first step in building this next generation of supporters. Many events across the state are already scheduled, with more to come as the year progresses.


One such event is an “Iron Ranger” competition that Ekong says will encourage hiking, biking and running 100 miles in the state’s national parks.


Ekong also notes the national program “Every Fourth-Grader in a Park,” which grants every fourth-grader in the U.S. and his or her family free admission to all the national parks for one year. The NPS also offers a Junior Ranger Program, which is not just for kids.


“We’ve had many senior citizens take part in the program,” says Ekong.


Arkansas’s national parks are important contributors to the state’s economy, with more than 2.9 million visitors annually.


“These visitors have come to the state simply to visit our national parks. But, they also need somewhere to sleep, somewhere to eat. So they are an important economic driver in the community,” Ekong says.


“Arkansas is unlike many other states because we have the best of culture and natural landscapes. We have a Civil War battlefield, trails, rivers….we have a diversity of experience. And there’s no limit to what you can do: hike, bike, float, experience spa and medicinal benefits.”


The first European settlement in the lower Mississippi Valley region, Arkansas Post became part of the United States during the Louisiana Purchase of 1803. By 1819, the post was a thriving river port and the largest city in the region and was selected the capital of the Arkansas Territory.


Established in 1972, Buffalo National River flows freely for 135 miles and is one of the few remaining undammed rivers in the lower 48 states. Prepare to journey from running rapids to quiet pools while surrounded by massive bluffs as you cruise through the Ozark Mountains down to the White River.


From the establishment of the first Fort Smith on Dec. 25, 1817, to the final days of Judge Isaac C. Parker’s jurisdiction over Indian Territory in 1896, Fort Smith National Historic Site preserves almost 80 years of history. Explore life on the edge of Indian Territory through the stories of soldiers, the Trail of Tears, dangerous outlaws and the brave lawmen who pursued them.


Little Rock Central High School is recognized for the role it played in the desegregation of public schools in the United States. The nine African-American students’ persistence in attending the formerly all-white Central High School was the most prominent national example of the implementation of the May 17, 1954, Supreme Court decision Brown v. Board of Education.


On Aug. 19, 1946, Virginia Blythe gave birth to her son, William Jefferson Blythe, III. Named for the father who died before he was born, he grew up to become William Jefferson Clinton, the 42nd president of the United States. In this house, he learned many of the early lessons that defined his life and his presidency.


Remember and commemorate the survival of the Cherokee people, forcefully removed from their homelands in Georgia, Alabama and Tennessee to live in Indian Territory, now Oklahoma. They traveled by foot, horse, wagon or steamboat in 1838-1839.

“Arkansas has more culture than is expected,” says Ekong. “And as a state we are not taking advantage of these resources like we should. I challenge the local community to get involved and to promote our national parks.


“If you were to ask ‘What do you hope to see in the next year?’, I would want every Arkansas citizen to see how fortunate they are to have these parks and to take advantage of them. My vision is that Arkansans become great champions for the parks in our state,” says Ekong.