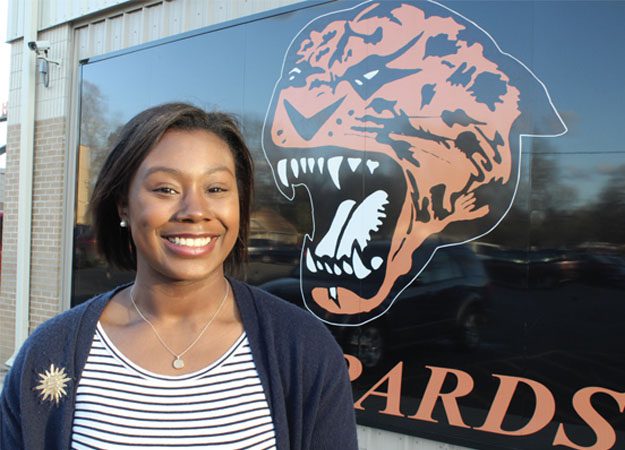 Malvern High School senior Christina Harris was recently recognized as the Young Person of the Year by the Malvern Chamber of Commerce.

Malvern, Ark., is known for producing bricks, Billy Bob Thornton and launching the career of John L. McClellan, the longest-serving U.S. Senator Arkansas has ever produced.

It’s a good bet that one day native daughter Christina Harris will eclipse them all as a source of civic pride.

If that doesn’t sound like your typical 17-year-old, it’s because Christina is anything but typical. The Malvern High School senior has a remarkably clear vision for her future, a laser-like focus she credits to her role models, starting with her grandmother and guardian Thelma Harris.

“She raised me since I was 10 months old, and she’s instilled within me to give back to people as well as how to be a strong individual,” Christina said. “She’s strong; she’s worked every single day. She goes to work even when she may not feel like it or even when she may not want to, but she never complains. She never depended on anyone to give her anything like government assistance or anything like that.

“She’s always been one to go out and get it herself. She showed me if you want it, go out there and get it.”

She’s also participated in about a dozen other school clubs and 15 separate community service initiatives. For her efforts, she’s received dozens of awards, commendations and honorariums, most recently as Young Person of the Year by the Malvern Chamber of Commerce, an award and scholarship sponsored by Bank of the Ozarks.

To top it all off, Christina has been accepted to the Naval Academy Preparatory School, a precursor to the U.S. Naval Academy, which she will enter in 2019, where she plans to major in political science and history.

“My aunt, Rona Green, is in the Navy. She’s been in for almost 30 years now,” Christina said. “She’s a commander, and she’s doing really, really good for herself, and through her success she’s always extended that hand back to us, her family. When she worked at the Pentagon, whenever she lived in Hawaii or Guam, she always sent for me to come out and experience what she was experiencing.

“That’s really why I chose the Navy; I saw all the positive aspects. I feel like it best fits me as a person because it’s full of opportunity and more ways to better myself.”

Christina’s next goal after a career in the military — preferably Naval Intelligence, she said — is to run for public office. She developed an interest in politics through her experience with student government, which led her to such activities as Arkansas Girls State and Arkansas Governor’s School.

The common thread woven throughout Christina’s commendable list of achievements — and something that exudes from the very moment you meet her — are the qualities of a leader. She said such attributes must be honed and developed, which is one reason why she demands so much of herself.

“I’m also continually critiquing myself, saying, ‘Well, hey Christina, maybe let’s do it this way. Try this one time.’ So being a leader is just overall growing as an individual, and it’s something that I’m continuing to grow at and continue to better myself.”

Dwain Hebda
Dwain Hebda is a writer, editor and journalist living in Little Rock. The president of Ya!Mule Wordsmiths, he’s covered a wide range of subject matter over the course of his 40 years of professional writing that includes magazines, newspapers and books. When he’s not bringing the tales of Arkansas and her people to the page, Hebda and his wife spend their energy on their four grown children and three lovely dogs.