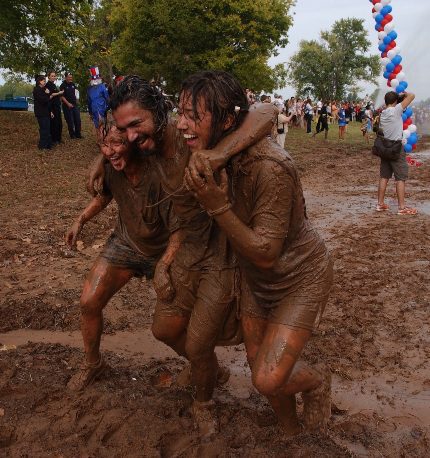 Registration for the 11th Annual Mud Run is up as officials begin preparing for the race day festivities.


“We started the Mud Run to introduce the sport of running to people who would have never considered it before,” said Geneva Hampton, the race CIC (that’s “mud-ese” for Chick in Charge aka race organizer). “It is the funniest race I have ever seen and it’s a great change of pace from the typical road race.”


The Mud Run is a “combination of the Macy’s Thanksgiving Day Parade, a Razorback Football Game and the Olympics with a little running thrown in” according to Hampton.


“We don’t have barbed wire. We won’t make you crawl through flames and we definitely won’t make you climb through anything with electrical current. The only thing we take serious is the mud,” she said. “The point is not to finish fast, but finish with style.”

“Since it is right around Halloween, we give everyone an extra opportunity to wear their Halloween costumes,” said Hampton.  “About 90 percent of our participants dress in some sort of costume. We have had everything from Oompa Loompas to three men in a tub. It gets very elaborate and very competitive.”

According to Hampton, the biggest competition on race day is not winning the race, but for the “other” awards handed out. Competition categories in addition to the top three overall winners are: cleanest, dirtiest, best costume, best performance in the mud pit – to mention just a few.