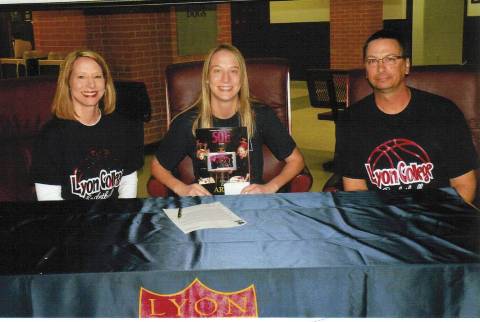 “[I’m looking forward to] getting to continue my basketball career with an amazing team and coaching staff,” Jackson said. “Both on and off the court I’m looking forward to all the new experiences, people I’ll meet and places I’ll get to travel. The whole thing is just exciting.”


The Morrilton senior was a member of this year’s 501 Basketball Team. She was a versatile player for Morrilton, contributing all over the court. Morrilton’s coach, Carin McNabb, who nominated Jackson for the 501 Basketball Team, described her as a “joy to coach.”


“I couldn’t have asked for a better coach than Coach McNabb,” Jackson said. “Over the past four years, she helped prepare me for the future both physically and mentally. She always pushed me to get the best out of me in practices and games, and there were many times when I didn’t like her but I know that she was only making me better. Not only did she prepare me for my future on the court, but she has helped prepare me for life away from it. She’s honestly one of the best coaches, teacher and friend a person could ever ask for.”


Jackson drew interest from Lyon early in her senior season.


“One of the coaches from Lyon came to practice and started talking to me,” Jackson said. “When I took a trip to visit the campus, I knew from the second I got there that it was exactly where I wanted to be. The small campus and the family environment on the team and throughout the campus is what I was really attracted to. I plan to major in pre-physical therapy and minor in psychology.”


Jackson has lived in Conway County her entire life. Her father graduated from Sacred Heart, and her mother attended Morrilton High. It will be a big change for Jackson this fall as she makes the move to Batesville.


“I’m going to miss my friends, the teachers and the coaches,” Jackson said. “I’m going to miss going to football games in the fall and getting to play every Tuesday and Friday night in the winter with some of my best friends. Besides playing basketball for Coach McNabb, weightlifting everyday with Coach Muller and high-fiving Coach Fisher every time I walk by him will be two of the things I miss most.


“I’ll remember my teammates and all of the laughs we shared, the bus rides, the pre-game meals. I’ll remember ‘McNabb Boot Camp’ where sometimes we would run sprints on the football field and end practice with doing bleachers, or we would flip big tractor tires. I’ll remember all the moments where we became closer and stronger as a team.


“I’m just thankful for my family, especially my parents, for all of the support they have given me over this 11-year journey. I’m extremely thankful for my best friend, Rebekah, for getting me through these past four years — I couldn’t have done it without her. God truly blessed me with the best support system of family and friends.”