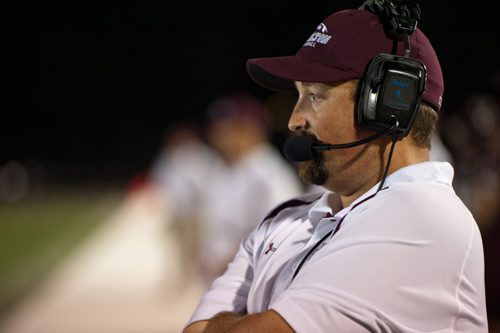 “It’s a big football community, and I just thought this was the place.”

Morrilton athletic director Trent Tipton thought McNabb was the perfect fit for his school. “His reputation as defensive coordinator at Russellville was very good, and I called a lot of coaches and they all kept pointing out that this guy is going to be great; he just needs a chance,” said Tipton, also Morrilton’s basketball coach. “In his interview, I liked what I heard from him. I felt like he was the guy we needed to get our football program going in the right direction.”

McNabb isn’t the only new addition for Conway County football this fall. New field turf has been installed at Devil Dog Stadium, and a new asphalt track was under construction at press time.

Morrilton finished 1-9 last year, so McNabb knows the task before him.

“There’s lots of excitement with the new field and probably the new coach and that kind of thing,” he said. “It’s been good, and we’re going to continue it. Obviously, you want to come in and snap your fingers and everything change, but that’s not the way it is, and it never happens fast enough for me.

“We’ve just got to keep chipping away. As long as the kids stay committed, it’s going to work out.”
McNabb grew up in Mountain Home and played for the Bombers under John (Duke) Wells. He said Wells and another Mountain Home coach, John Taylor, were among his biggest influences in making him want to coach.

“I just enjoyed (football),” he said. “I always have loved the game, and I just wanted to be around it all the time. So coaching seemed like a pretty good choice for me.”
He landed at Arkansas Tech in 1994 and played linebacker there. After finishing his degree, he stayed on as a graduate assistant under his coach, Steve Mullins, while earning his master’s degree. He spent three years as a full-time assistant with the Wonder Boys before making the move to Russellville High under Jeff Holt.

While at Tech, he recruited the Morrilton area, and while at Russellville, the Cyclones played the Devil Dogs every year. And when the coaching vacancy occurred, he was ready.

“Being so close helped,” McNabb said. “I was familiar with the people here, the athletic director and some of the administration.”
He arrived at Morrilton in February. His staff includes Kent Chambers (offensive line/special teams), Todd Sparks (wide receivers), Brooks Muller (defensive line), Scott Poteete (defensive backs) and Zach Watson (offensive line).

McNabb brought a new defense (3-4) and offense (Spread) as well as a new practice tempo.

The Devil Dogs compete in the 5A-West, arguably one of the toughest leagues.

“I think this is one of the best conferences in the state with a lot of the best coaches in the state, and I’m excited about the challenge,” McNabb said after the season opener against Russellville. “I’m ready to coach against those guys. I think it’ll be a lot of fun.”

The Devil Dogs lost their opener to larger rival, Russellville, 28-20, but McNabb wasn’t unhappy. Morrilton hasn’t won that matchup since 2005.

“We had our chances,” he said. “We had some positive things come out of it. ‘Pleased’ is not the right word, but I was encouraged by some of the things that we saw.”
Tipton said over the previous five years, the Cyclones had averaged beating the Devil Dogs by 20 points. So he, too, is seeing progress.

“We have struggled, and he’s not a miracle worker,” the AD said. “Things won’t change overnight, but he’s going to get things going in the right direction. It’s going to take some time, but I do believe in Coach McNabb.”

So how has the reality of being a head coach been different from what McNabb had anticipated?

“That’s a good question,” he said thoughtfully. “Probably what’s hard to understand, having not been a head coach, is all the non-football things that you deal with on a day-to-day basis. And so many things require your time.”

For head-coach experience, he need only look to his wife. Carin Pinion McNabb coached basketball at her alma mater, for the Arkansas Tech Golden Suns, before moving to the high school game. She’s head coach at Dardanelle now.

The two met when both were coaching at Tech and in graduate school. They now have two children: Chloe, 4; and Champ, 2.
With their schedules, when do the two head coaches see each other?

“In the offseason, I guess,” McNabb said, chuckling. “Luckily, both sets of parents live close, and that is huge. You couldn’t do it without that support close to you.”