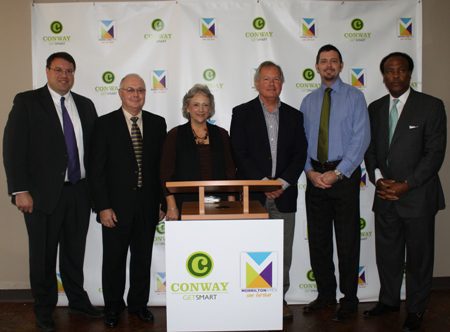 Representatives of Conway, Morrilton and Conway County gathered Monday morning in Downtown Morrilton to announce a unique strategic partnership with the Conway Development Corporation and the Conway Area Chamber of Commerce.  Under the arrangement, $20,000 will be paid annually to the CDC by the Morrilton groups to provide expertise in the area of industrial recruitment. The Conway chamber will also provide help with community development.


“It is a great day and a great crowd,” said Fred Briggler, chairman of the Conway County Economic Development Corporation. He explained that the Morrilton chamber and CCEDC had sought input from the Conway groups during a re-organization of the two groups. “We were very impressed with what we saw in Conway, especially how their community development efforts lead to economic development.”


Briggler said the agreement will ensure continuity in economic development while tapping into the expertise from the Conway group, which has an outstanding reputation in industrial recruitment.


Becki Griffey, chairman of the chamber board, explained that the agreement will ensure that the Morrilton officials continue to have access to professional expertise afforded through the association with the Conway chamber and CDC. “Regionalism is the new localism.”


Morrilton will still have a fully operational chamber. Griffey pointed out that while the chamber will work with Conway representatives, “the Morrilton team will still be the face of Morrilton.”


Brad Lacy, president and chief executive officer of the CDC and Conway chamber, said Morrilton chamber and CCEDC leaders approached the Conway groups over the summer to conduct an assessment but there were other factors that fostered the relationship.


“The Fayetteville Shale brought the two counties together faster than anything,” he said. “It had a huge economic impact on both of us. Maybe it helped everyone get comfortable.”


The second role will be in the area of economic development. “We’ll be their official contact with the state. If someone is interested in Morrilton, they will contact us,” Lacy said.


Lacy also explained why the CDC and Conway chamber would be interested in providing help to Conway County. He said that Conway is not in competition with Morrilton for industrial recruitment because of the size difference between the two communities. However, he said it would be better to see jobs stay in the region rather than be located in other parts of Arkansas or another state.


“It’s in Conway’s best interest for Morrilton to be the absolute best it can be,” he said. “This is an incredible community…You have incredible potential.”


Lacy was not aware of any similar arrangements between neighboring chambers and economic development groups in the state. “We are breaking new ground.” He added the Conway chamber and CDC might consider other partnerships in the future. “Conceivably, this could happen but the important thing would be for them to approach us.”


Bill Adkisson, chairman of the CDC, said the board was eager to enter into an alliance when the opportunity presented itself. “What is good for Morrilton and Conway County is good for Conway.”


Morrilton Mayor Stewart Nelson also spoke at the announcement, echoing the sentiment of Adkisson. “I look forward to this opportunity.”


Conway County Jimmy Hart also spoke and said the two communities had unofficially worked together for some time. “I think this is going to be a good relationship.”


Lacy too said it was a great day for Conway. In introducing the CDC and Conway chamber staff members in attendance he explained that the agreement involved the entire team, not just one person. “This agreement gives us an opportunity to help you develop as you need,” he said. “You’re going to be seeing a lot more of us up here.”

Briggler considered Monday’s announcement an important step for the area. “I personally believe that one day we will look back to this partnership as one of the most positive decisions we have made for our communities.”