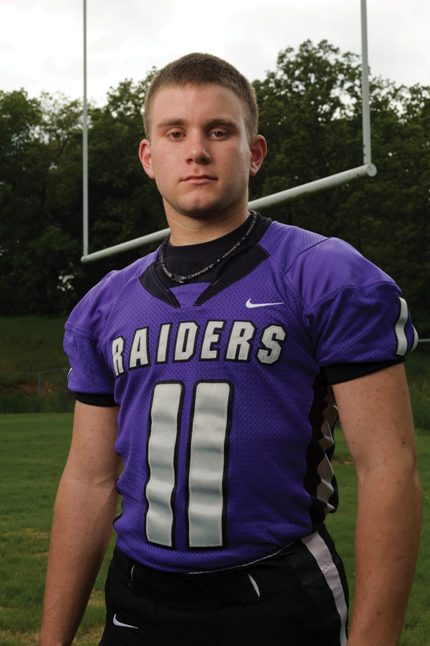 
Seven games in, the Riverview Raiders are right where they want to be — in control of their destiny. Despite losing their last two games and falling to 1-3 in 2-4A play, the Raiders control their own fate with the last three games of the year. If they keep winning, they can play themselves into the playoffs.


“Our senior class needs to step up this year and be leaders,” Moore said. “The team can go as far as the seniors take them. Our coaching staff pushes the seniors more than anyone else to be leaders.”


Moore, who plays linebacker for the Raiders, was selected to this year’s 501 Football Team — 27 players representing all 11 counties of the 501. The team boasts the best the 501 has to offer both on and off the field. Moore was nominated by his head coach, Stuart Hill.


“On the field, Andrew gives us leadership,” Hill wrote in his nomination. “He’s smart and tough. He’s a member of our team’s Leadership Council and huddle leader. He is accountable. I never have to worry about his grades or his conduct in the classroom. His sportsmanship is outstanding! He is very unselfish, and he always thinks of others before himself.


“Andrew [is] a consistent leader for us on and off the field. I also expect him to be able to make great decisions on the defensive side of the ball. He gives us consistent leadership. Andrew is a young man of great character and integrity. He is the type of player you want on your football team.”


Through seven games, Moore has accumulated 67 tackles, averaging almost 10 tackles per game. He hit his highest single-game total of the year last week against Stuttgart with 14 tackles.


So far, Riverview has managed just one 2-4A win, which came against Batesville Southside. That was the only conference team Riverview beat in 2014 on their way to a 2-8 season in their first year in 4A.


“We jumped up to 4A last year and had never been in 4A before,” Moore said. “It was like a culture shock. We weren’t used to seeing that level of talent like that.”


“They’re just right down the highway,” Moore said. “It’s really brutal for us because we all know each other. We want to beat each other for bragging rights.”


Moore and the Raiders have already surpassed last year’s win total, but there’s more to accomplish. Riverview, along with three other teams, are sitting at the bottom of the conference with a 1-3 record. Two of the Raiders’ last three games are against other teams sitting at 1-3, so a playoff berth is well in sight if Riverview can finish strong. Moore longs to return to the playoffs.


“When I was in 10th grade, I didn’t get a whole lot of playing time,” Moore said. “We went to the state playoffs, and one of our linebackers got hurt and I got to go in and play the rest of the game for him. I loved it. It was exhilarating. I was very undersized at the time. I was kind of scared at first, but as the game went on, I got more confident.”


Moore also plays baseball for Riverview. He’s a catcher and hopes to play baseball at the collegiate level. Off the field, Moore is a member of Beta Club. He’s also involved with the youth group at Kensett First Baptist Church just outside of Searcy. Moore has been a White County native his whole life.


“Searcy is not a big town or anything,” Moore said. “It’s real subtle. There’s never a big fuss over anything. It’s just really quiet and calm. Searcy is a really big football town. There’s always stuff you see in the newspaper. Football, football. Friday night lights. People always recognize you because they know you play football.”


Moore and the Raiders look to gain ground in the 2-4A standings this Friday playing host to Newport.