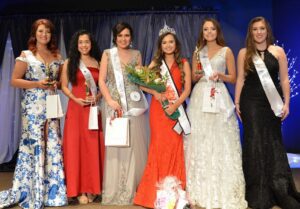 Micaela Reeves, 19, of Greenbrier was crowned Miss UACCM 2018 after competing in the 12th Annual UACCM Pageant on Nov. 3 at the University of Arkansas Community College at Morrilton’s Fine Arts Auditorium.

Reeves is a second-year student at UACCM, pursing an associate of arts degree in general education. After completing the necessary courses, she will apply to the UACCM practical nursing and registered nursing programs.

Hosted by UACCM’s SkillsUSA chapter, the pageant was open to current UACCM students and girls between the ages of birth and 17 years. Apart from seven additional categories, those who competed for the title of Miss UACCM were judged on beauty, professionalism, speech presentation and interview skills.

“We are so thankful for the contestants, the businesses in our community, and the UACCM registered student organizations who supported our pageant,” said Linda Zambrano, pageant director. “Also, a special thank-you goes to those who came to support the girls who entered the pageant. It is always encouraging to see the support these girls have from their families, friends and each other.”

All the proceeds from the pageant go to the UACCM SkillsUSA chapter to send students to state and national competitions.

The winners of each category: