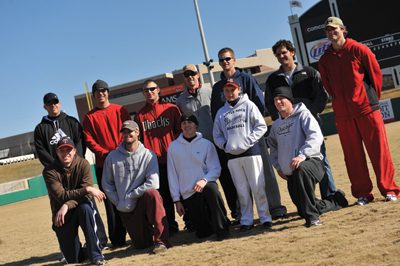 Since 2006, the Miracle League of Arkansas has provided children with disabilities the chance to play America’s pastime, but

it’s hardly ever been about baseball.

“These people are no different than anybody else,” said Miracle League of Arkansas Director Peggy McCall. “They just go about it differently. They are simply a kid, and they want to have fun just like every other kid. Our kids know how to play the game, but sometimes it may be that their bodies don’t let them move as well. The bottom line is that they’re a kid first, but they just happen to have a disability.”

A few years ago, McCall was attending her son’s kickball game when she ran into another mom. Their sons had played on a little league baseball team together when they were younger, so they quickly began reminiscing about past games and kids they had met.

“When I left the park that day, I said to myself that parents of kids that are disabled should be able to have the same memories that I have,” McCall said. “Parents need memories.”

“My perspective early on was as a media liaison of sorts,” said Little Rock radio station B98’s Jeff Matthews. “Just like with anything, you have to get the word out. You can build all the fields and order all the uniforms you want, but unless people know about it, they’re not going to come out.”

The Little Rock Rotary and KIDSource Inc. got on board, and a field was built at the Junior Deputy Fields in Little Rock. The Miracle League hosted its first game in the fall of 2006.

“We had a little girl our very first game who had never played baseball before,” McCall said. “She was in a wheelchair, and she looked really frail. Her volunteer – her buddy – was hesitant with her. I kept telling him to run the bases. When you get a hit, you run the bases – you don’t walk. He was afraid he was going to hurt her. She was just fine, and she loved going around the bases.

“The game was on a Saturday. She got sick that Monday. She didn’t make it out to the rest of the season, and she died. That was her first game and her very last game. She had a blast. She was smiling the whole time, and her caregiver – her grandmother – was just ecstatic that she had the chance to do that. When we say it’s more than just baseball, that’s what we mean.”

The Miracle League consists of two seasons each year – one in the spring and one in the fall. Last season, the Miracle League had 320-plus participants. Each player needs a buddy for every game, so that means 200 volunteers are giving their time each Saturday during the seasons.

“Every buddy is apprehensive at first,” McCall said. “I ask people to take two hours, so that’s two games. The first game, you’re worried that you’re going to say something wrong or handle the kid wrong. By the second game, you realize it’s OK. You realize that they are just a kid.

“People can come out for an hour or two hours each weekend and have the greatest experience without having to give up a lot of time.”

For the past two years, the Miracle League has hosted a Big League Training Camp featuring professional baseball players.

The camp was held in December and featured pitchers Cliff Lee of the Phillies and AJ Burnett of the Yankees.

“The camp is for kids without disabilities,” McCall said. “Kids don’t normally have this kind of exposure to professional athletes, so they get to come out to our camp and have a cool experience. When these kids are older and they hear about the

Miracle League, they’re going to make the connection to the time they met Cliff Lee or AJ Burnett, and they may want to give back or volunteer.”

In November, Lee and Burnett faced off in Game 5 of the World Series. Lee got the better end of that game, but Burnett got the ring as the Yankees won their 27th championship in six games over the Phillies.

Lee and Burnett are both Arkansas boys. Burnett pitched for Central Arkansas Christian in high school, and Lee pitched for the University of Arkansas and still lives in Benton during the off-season.

“Having the professional players adds immediate credibility to the Miracle League,” Matthews said. “These guys were on the biggest stage baseball has to provide. I’d be lying if I didn’t mention the financial aspect of this, too. These guys give not only their time, but also make huge contributions financially. That can’t be overlooked. You have to have money to make this league work. These guys give back, and that’s huge.”

For Lee it’s about more than just giving back money and time.

“It’s about giving kids with disabilities a chance to get out on the field and play around and have a good time,” Lee said. “I want them to be able to experience the game that has been good to me. It’s a perfect fit and something I feel strongly about.”

Burnett has a similar take on the Miracle League.

“I had so much fun last year with the kids,” Burnett said. “That’s the truth. We all donate, and we all do our share. But when it comes down to being out there with the kids and actually running around with them and playing the game with them, that means more than any donation.” 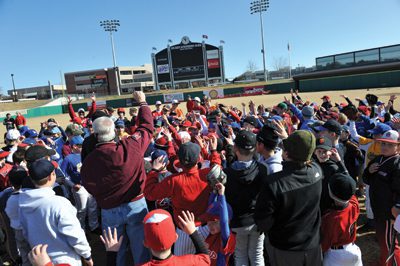 The Miracle League of Arkansas broke ground for a field in Springdale in November, and growth is planned to continue in the years to come.

“We are looking to find communities that want this,” McCall said. “We are willing to go anywhere in the state. We have a good program. It works. Our goal is to take our learning curve and help other communities start a Miracle League of their own. We just broke ground in Northwest Arkansas, and El Dorado wants to start a league soon, too. Every couple of years we would like to add more communities.”

In just a few years, the Miracle League has provided hope to hundreds of parents and children throughout the state of Arkansas. The hope is spreading.

“What I didn’t think about is that not everyone gets to play baseball – not everyone gets to play this amazing game that I love,” Matthews said. “The fields are built for kids with special needs, and the league truly ensures that every kid gets a chance to play. We have a ball that beeps, so children that are blind are able to play. Everyone plays, and that’s the most attractive thing for me.

To sign up for the Miracle League 2010 spring season or to find more information, visit www.miracleleaguear.com .