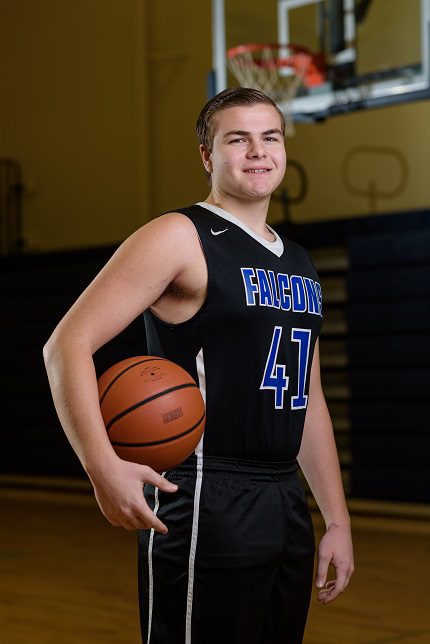 
After a brutal five-loss start to the season, the Faulkner County Falcons are back in the driver’s seat in the Arkansas Homeschool Conference with wins in five of their last six contests and have their eyes on homeschool basketball’s biggest prize — the Gold Ball Championship.

“At the beginning of the season, we played sloppily,” Falcons senior center Benjamin McNair said. “We couldn’t get our heads in the game and didn’t leave everything out on the floor. Since then, however, we’ve gotten a little better each game, and we keep putting a little more effort on the court each night. Last weekend, we got to a positive record, and we’re not done yet.”


McNair was selected to this year’s 501 Basketball Team — 37 players representing the best the 501 has to offer both on and off the court. The team is sponsored by Conway Ortho and Sports Medicine, Conway Regional Health System and First Security Bank. McNair was nominated by his head coach, Dwight Balch.


“As a senior, Ben is a leader both on and off the court,” Balch wrote in his nomination. “For the last two years, Ben played behind several more experienced centers. Doing so, he learned and matured as a player and is now much more effective in all aspects of his game.”


With momentum strongly behind them, the Falcons are setting goals even higher this season.


“After receiving Divisional Silver for the past two years, our goal this year is to get a Divisional Gold,” McNair said. “Our team’s mindset has been to play clean basketball. We’re working on our passing, shooting, defense and rebounding. We want to be very structured when we play and credit our recent success to that structure.”


“Ben played a key role in helping the team reach the finals of the Home School National Tournament in Springfield, Mo.,” Balch wrote. “He played center, developed his game and improved his physical conditioning in preparation for his senior year.”


According to McNair, a close loss to a rival sparked the Falcons’ turnaround.


“Early in the season, we took Gospel Light Christian to overtime,” McNair said. “They’re a team that’s quite a bit better than us, but taking a talented team to overtime showed us what we are capable of as a team. Even though we lost by one, we learned that we can play with anyone and have gone into each game since then knowing that we have what it takes to win.”


In his final season with the team, McNair accepted the challenge of playing a new role for his team.


“One of my biggest goals this year was to become more versatile on the court,” McNair said. “I’ve always played as a post player, but this year, I wanted to move into a forward role so I could improve as a shooter and be that guy that my team relied on to take the game-winning shot. I think the transition has been a positive one because it challenges opposing defenses to figure out how to play against me.”


Off the court, McNair gives back to the 501 through the youth group at The Summit Church in Conway.


“Ben serves with his local church, The Summit Church, in community outreach and several service projects including work to improve local playgrounds and the Conway Ministry Center,” Balch wrote. “He has served in several Life Choices banquets and fundraisers for various missions and a local camp for underprivileged children.”


After high school, McNair plans to attend college in pursuit of a business degree.


“Ben has a great work ethic, but more importantly, he is a person with high character,” Balch wrote. “He sets a great example for his teammates and younger players on the team. He is unselfish and can be trusted to make good decisions both on and off the court and handles adversity and stress on the court in a positive way.”


“Homeschool basketball is more than just basketball,” McNair said. “The coaches and players don’t just care about the game, they care about you, too. We’re competitive and not something to be laughed at. I recommend it to any homeschooled child who is interested in playing sports.”