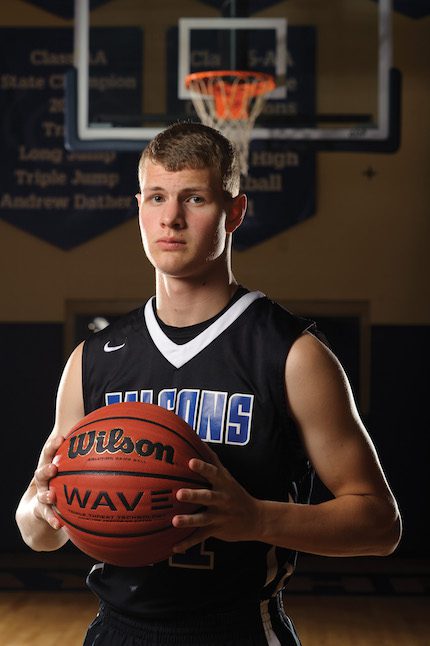 Posted at 16:42h in 501 Basketball Team, Sports by 501 LIFE
Share
by Mark Oliver
Faulkner County Falcons center Stephen McNair understands hard work. In addition to academics and athletics, the homeschooled senior also volunteers his time teaching a full house of his brothers and sisters.
“Stephen has 10 siblings,” Faulkner County Falcons head coach Dwight Balch said. “His mother said Stephen is always willing to help his siblings with their schoolwork, especially math. Also, Stephen loves to learn and will share what he has read with his siblings, teaching them new things.”
McNair was selected to this year’s 501 Basketball Team — 24 players representing the best the 501 has to offer both on and off the court. McNair was nominated by Balch.
“Stephen is humble, selfless and servant-minded,” Balch said. “He always hustles, is a big rebounder and is a clutch free throw shooter. I expect him to be a strong inside post player, and I can always count on him to make points in the paint for us.”
Though he has only picked up basketball in recent years, McNair has made quite the impact on the court in just four years — creating a few memorable moments along the way.
“Last year, in the state tournament, we faced off against a player from Mountain Home who was known for dunking on people,” McNair said. “During the game, he dunked on us and coach put me in the game so I could stop him. I’ve never been dunked on in a game before, and although he almost did it once, I blocked his dunks for the rest of the game. Although we lost the game, it was a big win for me.”
In his senior season with the Falcons, which are currently ranked 40th nationally among homeschool teams, the athletic McNair has a clear vision of the goals that lay ahead for he and his team.
“Our goal is to win state,” McNair said. “It takes a lot of working out and dedication. In the process, I’d also like to dunk a few times in a game. I’ve gotten very close.”
Although McNair has yet to achieve his goal of dunking the basketball, Balch says that it’s only a matter of time before the senior gets his wish.
“Stephen is always working on his vertical,” Balch said. “His time is coming, and when it does, it will be a culmination of all the hard work he dedicates to the game.”
With the homeschool state tournament on the horizon, each game becomes a critical challenge for the Falcons.
“We have the toughest state tournament of anyone in the nation,” Balch said. “The match-ups are balanced and very competitive. Every game determines the seeding for the national tournament in Springfield, Mo. In the past, teams from Arkansas have done quite well on the national level, so it makes our performance in the state tournament that much more important.”
The Falcons, members of the Arkansas Christian Conference, call a number of courts around Conway home.
“We’re very gracious that Hendrix and Central Baptist College lend us their facilities to play our games,” Balch said. “Typically, we practice three to four mornings a week at the Don Owen Sports Center or the McGee Center.
Off the court, McNair exhibits a number of talents, in addition to playing multiple sports.
“To be honest, when I’m not playing basketball, schoolwork takes up quite a bit of my time,” McNair said. “In my free time, I play music. I started playing piano last year and I’m considering playing soccer in the spring. I’m trying to get in shape and get my schoolwork done. It’s a challenge to balance it all.”
According to McNair, one of his greatest experiences in his young life was visiting South Korea with Youth Ministry International.
“I went on a mission trip to South Korea last summer,” McNair said. “We went as English teachers and spent a lot of time witnessing to the kids there and teaching them songs, words and phrases. It was my first mission trip and it was very exciting. It changed my life.”