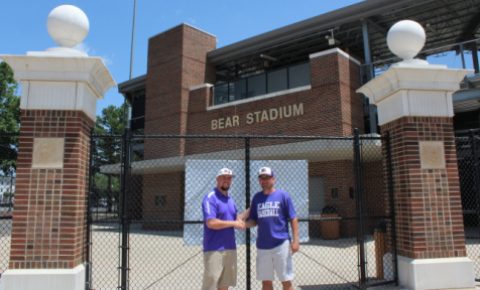 Davis and his player Cole Schichtl will look for a bit of revenge next week when they face off one more time against Mayflower coach Joe Allbritton and his Derek Vickers in the Arkansas High School Coaches Association All-Star Week activities at the University of Central Arkansas.


Davis and Schichtl will represent the West; Allbritton and Vickers will be on the East roster.


“I wish we were on the same team so we could coach with each other,” Davis said of his pal Allbritton. “I told everybody, Mayflower’s a big part of us being able to do what we did this year, playing them three times. They were a very good team, and they definitely made us better.”


St. Joe finished 25-4 after trouncing Dierks in the state title game at the University of Arkansas’s Baum Stadium, 13-3.


The Eagles were no slouch, either, as they reached the semifinals of the Class 3A tournament, falling to Fordyce, 5-4, to finish 29-3.


“I’m super proud of Luke,” Allbritton said of his buddy. “They did a great job. They were one of the best teams we played all year, and we had a feeling they would do it.”


Mayflower won the first meeting of the season in the Bauxite tournament, 4-3. St. Joe avenged that loss with a 4-2 regular-season win at home; the Eagles won the rubber match at their place, 7-5.


The two Eagles and two Bulldogs will come together momentarily early next week. Coaches will report on Father’s Day with players following on Monday. Practices for all sports will begin Monday. Baseball and softball doubleheaders are set for Tuesday, June 18; soccer and volleyball is scheduled for Wednesday, June 19; basketball will go Thursday, June 20; and football will conclude the week’s festivities on Friday, June 21.


With the baseball games set for Tuesday, teams will have just two practices.


“In baseball, it’s hard to coach kids you’re not with all the time,” Allbritton said. “You basically just roll them out there. There’s nothing special we’re going to teach them. We’ll just go out there and coach.”


Davis is making his All-Star baseball debut. He served as an assistant in volleyball in 2011.


“It’s an honor because you are selected by your other coaches, but to me it’s more of a reflection of my players,” he said. “They’re not going to pick you if you’re 2-20. You usually pick the guys who have good seasons, and you can’t build a house without the right tools. I’m just honored to represent my players.”


Allbritton was an assistant in 2001 before the AHSCA took in baseball as part of its more expansive All-Star activities. He agreed, though, it was “quite a compliment” to be selected.


Once the coaches are chosen, they get together and choose their rosters. Allbritton said each team chooses three players from each classification.


“We nominate as well, but a lot of good kids get left out,” he said.


Allbritton said he was proud of his Faulkner County rivals from St. Joe.


“Luke does a good job; he’s got some good boys over there,” he said. “I consider him a friend.”


Davis said after the intensity of a state championship season, he was looking forward to a bit of a breather as an assistant.


“There’s not a whole lot of pressure, but we’re coaches for a reason,” he said. “We want to win.”


Even if his friend is across the field.