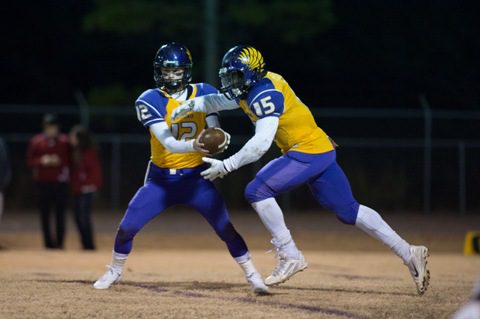 03 Dec Mayflower falls in 3A quarterfinals


The Mayflower Eagles’ monumental season came to an end last week in the 3A quarterfinals against Episcopal Collegiate. The Eagles fell at home, 47-34. Turnovers and the battle of the trenches proved to be big factors in the game.

“I feel like the physicality of the game was the difference,” said Todd Langrell, Mayflower’s head coach. “Anytime you cannot win up front you’re going to have a long night. The difference in the game came down to turnovers, too. We had one lost fumble and an interception.”


The sting of the loss can still be felt in Mayflower, but all in all, the positives coming out of this successful 2014 campaign far surpass the ending.


“This year has been great,” Langrell said of his first year at Mayflower. “Great players make good coaches. We have some great players with some great skill sets. I have so many memories from playing and coaching on this field. A lot of emotions were brought to me each time I took the field.


“One of my greatest moments was last Wednesday when we were in defensive practice and our defensive line was reading down blocks versus screen and pass. It was a culmination of everything we have covered this year. It was awesome to see how far our defensive line (Austin Grundy, Jeff Wilson, Jesse Ryan, Justin Case, Tyler Godwin and Stephen Fuller) had come. They got it!”


“We are losing 99 percent of our offensive productivity,” Langrell said. “We need some players to step up and take that role. We will have some names not heard of that will be instrumental in our success. I can’t wait to see how they respond!”

Ultimately Langrell and the Eagles will miss a lot more than just numbers and production when this senior class graduates in May.


“This group gave us complete buy in,” Langrell said. “The seniors bought what we were selling. It may not have been the most popular thing but was the selfless thing to be a part of. These seniors came to work each day to get better and to be the best players they could be.


“It has been a special group that all got along with each other. Our center, Austin Grundy, graded out at 95 percent every game, has 4.0 GPA and is a special young man that just did whatever it took to make us the best.”


As successful as 2014 was for Eagles football, it’s just the first step.


“We need to improve at many things including our size, speed and strength,” Langrell said. “Our offseason and the recruitment of the hallways will be critical in our success in 2015. I expect to compete for the conference championship. We have pride and tradition in Mayflower, and if we can come together and believe as one, we will have a chance.


“Mayflower is a special place to be, and I am thankful I am the one chosen to lead this football team in the future.”