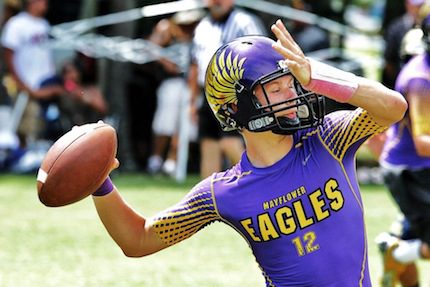 11 Aug MAYFLOWER: Eagles ready to challenge for 2-3A title


It could be argued that no offense in the state was as potent as Mayflower’s in 2012. The Eagles set state records offensively, and in their six wins, they averaged 54 points per game.

The Eagles took fans on a roller coaster ride every game, almost scoring at will. The only problem was that they also were seemingly scored on at will, a problem that the Eagles aim to rectify this fall.


“He is the leader of our defense [at linebacker] and makes our calls.”

Senior Sean Kocher is a force on the defensive line. Senior Josh Sutton provides speed on the edge at defensive end. Senior Ryan Koonce provides leadership at linebacker, and seniors Michael Post and Graham Wilson are one of many Eagles with experience in the secondary.


Mayflower enters the fall with one hole in the secondary, however, as all- conference senior Bradley Chambliss is likely to miss time after suffering an injury in the summer.

Classification: Senior
Position: OL/LB
On the field: He is constantly encouraging his teammates, especially the younger guys. He is one of the hardest workers on the team and everyone respects him.
Off the field: He leads by example. He is a musical worship leader for his youth group. He also helps head up the student section for basketball games. He loves everything about being a student at Mayflower High School.
Community work: He takes part in community service every year.
Sportsmanship: He is very aggressive from snap to whistle and then he is the first to help up an opponent. Exactly what you want in your players.
Classroom: He has a 3.5 GPA and is always helping those around him become better.
Expectations: I expect him to lead our team in tackles and anchor one of the best offensive lines in the state.