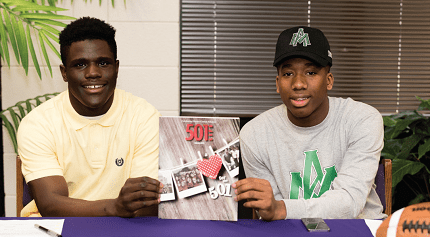 Story and photos
by Callie Sterling

Both students are excited to begin this new chapter in their lives.


“I am very blessed,” said 18-year-old Lasker. “I want to thank God for the opportunity to continue my football career.”


Bailey gave thanks to God and his Mayflower High School football coaches.


“These coaches are the best coaches I have had in my entire life,” said 18 year-old Bailey. “God has blessed me and I am just so happy.”


Head football coach Todd Langrell spoke at the signing ceremony about how the two seniors would represent Mayflower well.


“These two young men will represent Mayflower with class and respect at UAM and Arkansas Tech,” Langrell said. “To the football team, you are the reason these two are here. Football is the ultimate team sport. It takes 10 guys on the football field to make one guy look good.”


Langrell showed his gratitude and appreciation toward the players’ families.


“Nothing would be possible without these parents here today,” Langrell said. “I will enjoy watching them play in college but I am more excited to get an invitation in the future to see you graduate college. I can’t wait to see you walk across that stage. This is all about furthering your education.”


The entire football coaching staff expressed their joy for Lasker and Bailey.


“I am very proud of them both,” said Coach Dale Jones. “They put in some really hard work their senior year and now they are reaping the benefits. They definitely made us better defensively.”


The parents of both athletes could not contain their excitement for their sons.


“Not only Trey, but our entire family is so blessed and appreciative,” Lloyd Lasker II said. “We are very proud of his accomplishments. We know this is just the beginning of many great things for Trey. We watched him grow, work hard, stay determined through the ups and downs and he persevered. His hard work has been a testament of his character.”


Bailey’s father was present and also expressed his gratefulness for the scholarship and opportunity for his son to play college ball. “We have been looking forward to this day for a long time,” Anthony Bailey said. “Justin and I started working on football when he was 4. I think he is going to do really well.”


Siblings and grandparents of both young men were present at the high school for National Signing Day. The Mayflower High School library was also full of teachers and fellow students.


“Justin’s grandma and I have been here supporting these two through their entire journey,” said Lasker’s grandmother, Donna Boxley. “These grandmas don’t miss games.”


Helen Fuller, Justin Bailey’s grandmother expressed some brief sadness but overall is happy for her grandchild. “I am sad because I am going to miss him so much,” Fuller said. “I am truly excited though!”


Lasker has come from a long line of athletes.


“Trey’s grandfather, Lloyd Lasker Sr., was the first African American to ever play football at what is now the University of Central Arkansas,” Lloyd Lasker II said. “His mother ran track for Pennsylvania State University. Greg Lasker, another relative, won the Super Bowl in 1986 for the New York Giants. I guess football is just what we do. Sports are just what we do.”