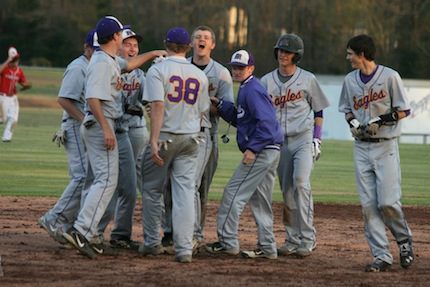 
Mayflower has been in the news this spring as the center of the Exxon oil spill, but the town may next be on the map for a stellar baseball season.

Joe Allbritton’s Eagles (24-1) will open the Class 3A Region 2 Tournament at Glen Rose at 5 p.m. Friday against Rose Bud, the fourth seed from the 2-3A. A win there would guarantee a berth in the Class 3A State Tournament at Harding Academy scheduled Thursday, May 9, through Saturday, May 11.


After graduating just two seniors from a 20-13 team that fell in the first round of the Class 3A State Tournament last year to Genoa Central, the eventual champion, Allbritton knew this season could be special.


"We’ll schedule 10 losses a year, because you’re going to lose if you play better competition," he said. "This year we’ve been able to scratch out wins against some pretty good teams. Last year we lost a lot of close games, and this year we’ve won a lot of close ones. That’s the difference between having a bunch of sophomores starting and a bunch of juniors starting."

Mayflower’s only loss came to Conway’s St. Joseph High school in March, 4-2, a few days after surviving a close game with the Bulldogs in the Bauxite tournament. The Eagles swept through their conference schedule, 7-0, to take the top seed into the district tournament. They won the district’s top seed to the regional by knocking off Glen Rose in the semifinals, 6-1, and Episcopal Collegiate in the championship, 13-0.


"At the end, anybody who was hanging around got to eat," Allbritton said. "They were able to get a bunch of donations from different businesses. Exxon was not solicited; we wanted to show we could do things for ourselves.


"It was a very nice gesture and good food. Our team got fed twice."


Their leadership has been a major factor in the Eagles’ success, but it’s not the only one. They have four pitchers with ERAs under 2.2. Junior Jordan Burns is 5-0 with two saves. Vickers is 6-1 with a 1.17 ERA. Sophomore Austin Grundy is 8-0 with a 0.53 ERA.


"He has given up three earned runs all year," Allbritton said of Grundy. "He has come along quicker than we thought he would."


Defense, too, has been a strength, and the team batting average of .320 is 30 or 40 points higher than last year, Allbritton said.


"We strike out only about four times a game, and we walk or get hit by a pitch more than that," he said. "We’ve gone from a team that got on base via a freebie once for every three strikeouts to one that is now in the black — we get on 1.7 times for every strikeout."


Junior first baseman Trey Bradley is the team’s leading hitter with a .400 average and 35 RBIs. Vickers bats .400 with two home runs and 30 RBIs.


"I can’t toot everybody’s horn enough," Allbritton said. "The thing about it is it’s not just those nine. We’re blessed with talent. We’ve got another nine on the bench, and we scrimmaged against each other last week and the score was 1-0. They’re just talented. We’ve got some guys who can play."


While the future looks to be good for the Eagles, Allbritton said the loss of this senior class would hurt.


"They’re a bunch of leaders," he said. "It’s more about them than anything — how they’ve led our practices and games, how they support each other. It’s a tight-knit group. They’ve overcome adversity well in spite of me and my temper. That senior class is more than impressive."


"What sticks out to everybody is the overall record, which can be misleading, but as far as being solid everywhere, yes, we are," Allbritton said. "I don’t want to jinx us because we could lose Friday as easily as we could win, because it’s that time of year.


"The pitching depth is what gives this team a better chance at excelling. Those other teams of ours had two quality arms, but now we’ve got nine guys we could pitch. That doesn’t mean we wouldn’t lose, but we’ve got nine we could put out there without worrying about a walk fest."


He shared accolades with his softball colleague, Steve Herron, and Herron’s Lady Eagles, who are also headed for their regional.


"They’re doing great," Allbritton said. "They’ve got a group of freshmen who have been a spark plug. They’ve got good pitching and good bats."


And for the moment, at least, oil is the last thing on their minds.