The Maumelle Chamber of Commerce recently celebrated its 2008 accomplishments while recognizing a few of its own members with special awards at the group’s annual banquet. 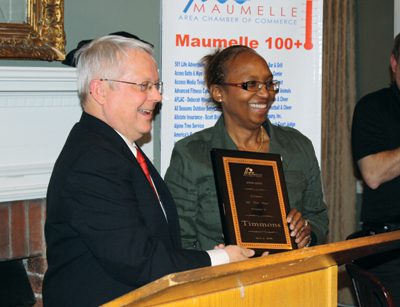 Among the 2008 accomplishments, the chamber celebrated the 102 members that had joined the organization within the last year as well as the 47 that had been members for more than 10 years. The names of the businesses were prominently displayed on banners during the banquet, held at the Maumelle Country Club.
Phil Elson of the Arkansas Travelers was the keynote speaker for the event.
“The businesses and citizens in the Maumelle area made this next block of the program very difficult,” said Dave Gattinger, 2008-2009 president, referring to the awards presentations.
“There is only one recipient in each category but there are many, many others who could have been chosen.  And to tell you the truth, that’s part of what makes Maumelle such a special place.  Those who give back and support the community and make Maumelle a great place in which to live, work, play and shop.”

Citizen of the Year

The chamber presented Timmons with the Citizen of the Year Award, recognizing her community service and willingness to help others.
“This year’s recipient has been giving to the community for many years and does it quietly and without fanfare,” Gattinger said. “She is a founding member of a small and mostly quiet organization that helps fellow citizens in a variety of ways…This citizen and her group have never turned their backs on anyone in need.”
Timmons and the group have brought back the Maumelle Hometown Thanksgiving dinner, assisted children in need with membership fees for the community center, and provided housing and essentials to fire victims.
“This citizen never looks at the negative aspects of a project – only at ways to make it happen.  She respects the right of others to have a differing opinion or the right just to be different from everyone else….She is an entrepreneur who has instilled that same spirit in her children.”

Small Business of the Year

Beef O’Brady’s, owned by Tim and Rebecca Jones, was recognized for its support of many local organizations. “They regularly host family nights, kids nights, school nights, and cause nights where 10 percent of that night’s receipts goes to the school or cause,” Gattinger said. “They sponsor Scout troops and several local sports teams. They generously support silent auctions and fundraisers, and they participate in community events like the Taste of Maumelle.”
Gattinger also noted that the restaurant seems to be “the place to go” to see local high school banners, pictures and jerseys on the wall.
“They are a great community partner, dedicated Maumelle business and exhibit a real entrepreneurial spirit.”

Large Business of the Year

Plastic Ingenuity – a chamber member for over 10 years – was named the Large Business of the Year. The company is also one of the Top 10 employers in Maumelle.
Gattinger cited several examples of the company’s contributions to the area, including the donation of an expensive machine to a university to help advance skilled training.
“Plastic Ingenuity has been supportive of opportunity fairs for dislocated workers and has gone out of their way to hire some of them,” Gattinger said. “They have also helped new industrial neighbors by offering office space and office machines while these new neighbors were getting started in the industrial park.”

The Maumelle chamber also recognized its Ambassadors group and thanked members for their assistance.
Suzie Winn was named Ambassador of the Year and Debbie Akers received the Ambassador Spirit award.
Gattinger was also recognized for his leadership and service to the chamber. At the banquet, he officially turned over the gavel to Randy Verboon, who began his presidency.