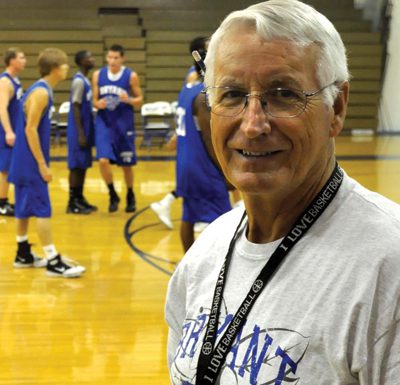 26 Oct 2009 Marvel bounces back into coaching

“The hardest part of staying retired for me is watching kids play basketball and seeing that they’ve gotten away from the fundamentals,” Marvel said. “It’s hard to see kids lose when they don’t have to lose. The basics are all you need to play the game, and that’s what I’m trying to get back to the kids.”

Marvel is taking over the boys’ basketball program at Bryant. Family ties pulled him in when the previous coach left Bryant for Bauxite. Marvel’s daughter, Rhonda Hall, coaches the eighth grade girls at Bethel Middle School, and his son-in-law, Randy Rutherford, is the principal at Bryant High School. Rutherford is married to Marvel’s other daughter, Robbie. Marvel and his wife, Jeanette, moved to Bryant after Marvel retired the first time from the University of Central Arkansas in 2004.

“Bryant was in need of a coach,” Marvel said. “The athletic director is a good friend of the family, and he just asked me if I would do it. I said I would, so I’m back in it for one year. I wanted to. I kind of like the idea of coaching the guys again. It’s been a long time. I want to see if I can still do it.”

Marvel is best known for his career at UCA, but his coaching legacy began at the high school ranks in Magazine (Logan County) in 1965. Before coming to UCA in 1980, he coached both girls and boys – at the junior and senior high levels – at Magazine for one year, at Cedarville (Crawford County) for four years and at Fountain Lake (Garland County) for nine years.

It’s been 30 years since Marvel coached high school students, and the times certainly have changed.

“The kids of today’s time are totally different than before,” Marvel said. “Back in that day, if you were in the gym working, then that’s all you were doing. With kids of today, you can be trying to work, and a few of them will continue doing what they want to do. It’s just different now. I wanted to see if my system would work with these kids.

“I like Bryant; it’s a good school. It’s a good sized school, but it still feels like a country school to me. I like that part. The kids are receptive and have been nice. I think they’re curious to see if what I’m doing will work, too. I’ve enjoyed it. I really do like the kids. That’s what keeps you wanting to coach. It’s the kids. If just dealing with the kids is all you have to do, I could coach forever. When you have to deal with the outside things, like the parents, it messes up coaching worse than anything.”

Marvel landed at UCA in 1980 and coached the Sugar Bear basketball team until 2004. He also coached tennis for his first 13 years at UCA. He is the winningest women’s coach in Arkansas college basketball history with 494 victories. He is a member of the UCA Sports Hall of Fame, and he led the Sugar Bears to the NCAA Division II Elite 8 in 2003, which was a first for the program.

In his 24 full seasons with UCA, Marvel reached the postseason 21 times and never had a losing record. Marvel came out of retirement to coach the Sugar Bears through their Southland Conference schedule in 2008, finishing 5-11.

Throughout Marvel’s life, basketball has always been a constant.

“When I was a kid, it was always sports with me,” Marvel said. “My dad worked construction, so we moved often. Basketball was the way I got connected with new communities. It always kept me interested and involved.”

The Bryant Hornets will play their first game under Marvel on Thursday, Nov. 12, at Perryville in a benefit exhibition. Perryville’s coach, Terry Smith, was a graduate assistant under Marvel at UCA.

Forty years and counting, Marvel is still in love with the game.

“I still have the desire to get the kids to realize that they can win with the basics,” Marvel said. “The biggest challenge is making them realize that all you have to do is play fundamentally sound and have fun. You can’t play basketball unless you’re having fun.”