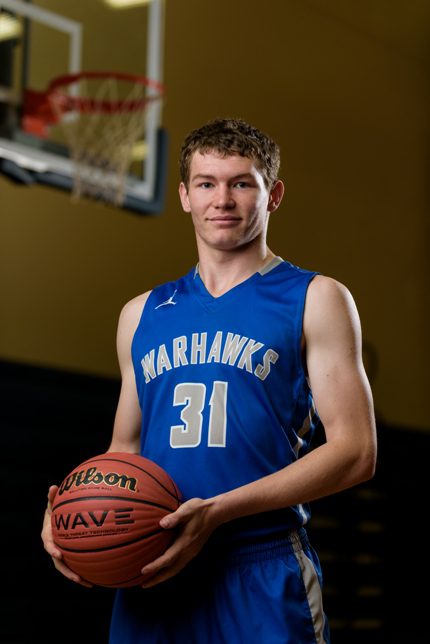 
Before the season began, Mount Vernon-Enola junior Kanyin Martin set three goals. Each time the forward takes the floor this year, he focuses on those goals as motivation to be the best player he can be for both himself and his team.


“My first goal is to get noticed by more colleges,” Martin said. “It has always been my dream to play college basketball. I’ve met with Delta State University, and I’m working hard to create more opportunities for my future. Another goal I have is to earn all-state honors. Last year, I won all-state, all-conference, all-district and all-regional honors. To continue that this year would be special to me.”


Personal goals aside, Martin values his third goal most.


“I want to do everything I can to help lead my team to a state title,” Martin said. “I know that it will take me devoting every free moment to being in the gym getting as good as I can so that I can be the best leader for my team. No matter what it takes, I’m committed to making my team great. If it’s cheering them on, making sure they have water to drink or making a big shot at the end of a game, I’m ready to do whatever it takes to win.”


Martin was selected to this year’s 501 Basketball Team — 34 players representing the best the 501 has to offer both on and off the court. Martin was nominated by his head coach, Justin Rodgers. The team is sponsored by First Service Bank and First Security Bank.


“Kanyin is a great leader and a well-defined basketball player,” Rodgers wrote in his nomination. “He sets a great example in practice and always encourages his teammates positively. He brings a great attitude to practice every day and lifts up those who need it. There is nothing on the basketball court he can’t do.”


“We’re playing really well because we’re out there having fun and being ourselves,” Martin said. “We’ve been playing together since the seventh grade, and we’re all buying into being a team and playing together as a team.”


According to Martin, it didn’t take long for the Warhawks to find their identity this season.


“Four games into the season, everything changed for us,” Martin said. “Playing against Bay, we went out there as a team and played and trusted each other. We shared the ball and great things kept happening for us. When we beat them, that’s when we knew that it was going to be a good season for us.”


The win over Bay not only inspired his team, but also left Martin with his favorite basketball memory.


“Toward the end of the third quarter in that game, I dunked on two of their players at the same time,” Martin said. “It was amazing — not only for me, but for my team, too. The crowd was crazy and everyone was hyped up. That moment sparked our team and gave us the edge we needed to win the game.”


Growing up in a basketball family, Martin attributes his growth as a player to a sibling rivalry with his older brother and former teammate, Newly Martin.


“One of the biggest things that made me the player I am today was playing basketball against my older brother,” Martin said. “I would play against him every single day, and he always won. Not only would he beat me, but he’d try to beat me as badly as he could. Last year was the first time that I really beat him, and since then, I’ve gained the confidence to blossom out as a player.”


Off the court, Martin is a member of FFA and enjoys rodeo with his mother and brother. Despite his busy schedule, the junior finds time to give back to the community he calls home.


“At the beginning of the year, the whole basketball team went and spread mulch for the preschool playground,” Martin said. “When I have free time, I volunteer at the elementary school. At rodeos, I offer to help others with fixing the ropes or fixing saddles, too.”


“Kanyin volunteers his time with the ‘Fill the Boot’ campaign, which helps families during Christmastime,” Rodgers wrote. “He also helps with Firefighters for the Cure, which helps cancer patients during treatment time. He has gone on mission trips with his church and volunteers through other church activities.”


Martin hopes his story will inspire others to follow Christ.


“The most important thing in my life is Jesus Christ,” Martin said. “I know that I can do all things through Him. I believe that all of our basketball success has been because of Him. If no one else gets anything out of hearing my story, I want them to know that I’m a Christian and I believe that Jesus Christ can do anything.”