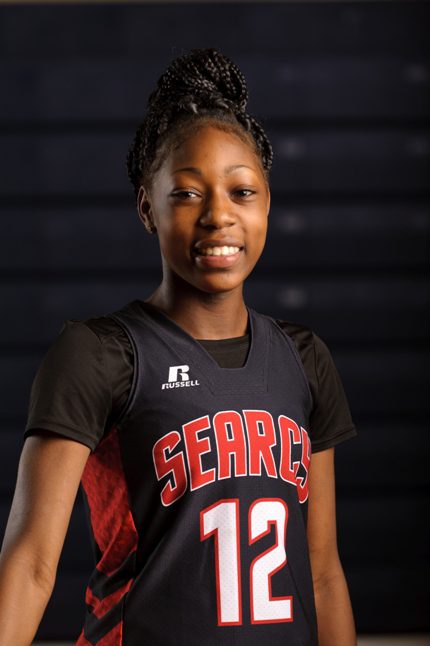 
There’s no quit in Arabriaun Mack.


The senior forward has given everything to her Searcy Lady Lions this season. Despite a tough year for Mack and the Lady Lions (7-17, 2-11), the team is resilient and finishing strong.


On Tuesday, Mack led Searcy to a 41-35 victory over Mountain Home. The loss kept Mountain Home from earning the top playoff berth out of the 6A East.


Although Mack won’t get to make a trip to the 6A state playoffs, the senior won’t look back negatively on her last high school basketball season.


“My favorite basketball memory was this year actually,” Mack said. “We were down by two points with 2.5 seconds on the clock, my team dribbled in and kicked out to me for the 3-pointer and I made it and we won. It was the best feeling ever!”


Mack was selected to this year’s 501 Basketball Team — 35 players representing the best the 501 has to offer both on and off the court. She was nominated by her head coach, Michelle Birdsong.


“Arabriaun is a great rebounder and strong post,” Birdsong wrote in her nomination. “She handles the ball well and shoots well. She works hard in practice and gets her teammates to work hard. She is a leader on the floor and plays hard every possession.”


On the court, Mack strives to lead by example in every way that she can — whether it’s through her attitude or giving encouragement.


“I always have to overcome,” Mack said. “Like when I get frustrated, I work not to show it and just keep playing. I also had to overcome when one of the underclassmen tore her ACL. She looked up to me, and that was kind of personal to me because she was like a little sister. I had to tell her everything will be OK. I would’ve really liked for her to play with me my senior year.”


Adversity is nothing new to Mack. Throughout her life, she’s turned to basketball as an outlet.


“I’ve had so many personal challenges to overcome off the court — it’s so many that I can’t even explain,” Mack said. “I’ve just always had a lot going on in my family and stuff. Growing up and never having a dad was hard, but I managed and got through it and that really was how my love for the game of basketball started — hooping whenever I got in a stressful situation.”


Mack also runs track for Searcy and participates in the long jump. She’s a two-time long jump state champion. Off the court and track, Mack is involved in Fellowship of Christian Athletes and is a Spanish Honorary. After practice, Mack works as a secretary at her church.


Entering her final high school game, Mack is averaging 12 points and six rebounds per game. Mack and the Lady Lions will close out the regular season at Cabot at 6 p.m. Friday.