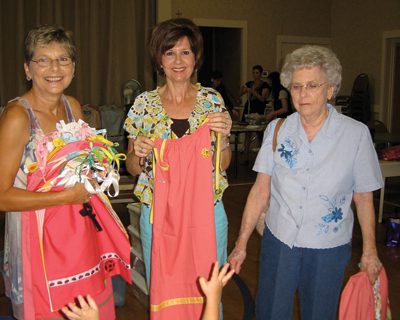 As Cathy Dingler’s 60th birthday approached, she knew that she wanted to do something special to celebrate.

She put a notice in the bulletin of her church – First United Methodist in Malvern – announcing that she would be having a dress making party in honor of the occasion.

“My daughters had said something to me about making a pillow slip dress for my granddaughter, and I had no idea what they were talking about,” Dingler said. “As I was watching the news one day, I heard them mention that a woman in Oregon had made some pillow slip dresses for Little Dresses for Africa. I was watching to mostly see what they were talking about, and there this woman was. She had made 200 dresses, and I thought, ‘I can do that!’”

Little Dresses for Africa is an organization started by Rachel O’Neill who traveled to Africa on a humanitarian mission. The goal of the organization is to provide relief to children in Central Africa by providing dresses to the little girls in the area.

“In Malawi alone, there are 1 million orphans,” Dingler said. “The lady that began this organization went to Africa, and she saw so many little orphaned girls who were having to parent their siblings because of the loss of parents, mostly to AIDS. She wanted to give the little girls hope and make them feel important and loved.”

Through the program, people from all across the United States join together to make dresses out of simple pillowcase patterns. The organization makes arrangements for the dresses to be delivered to the children in orphanages and kids camps.

Dingler says that her involvement with Little Dresses for Africa has less to do with actual dresses and more to do with teaching women and girls that they are loved and cared about.

“It’s not just about the clothing. It’s about the self esteem, the love and the hope,” she said. “They are in a society where males are valued higher. To me, the fact is the little girls are the most mistreated, the most discriminated against . . . I actually try to pray over each dress, ‘Lord help the child who receives this dress to know that somebody loves her.’”

Dingler invited friends and family to her church to sew and fellowship together. The FUMC fellowship hall was transformed into a makeshift sewing room. Dingler’s sisters came from different states to attend the party.

“There was such camaraderie the day of the party. There were a lot of my friends . . . My sisters came from Colorado and Kansas, they picked up a friend of mine in Branson and of course a lot of people from our church were here. Friends from my neighborhood came, so there were groups of people who had never met each other. There was one lady who had never met anyone here, one of her friends from my church told her about it, she stayed the whole day and she’s my dear friend now!”

Dingler set a goal to make 60 dresses at the party. At the end of the day, the partygoers had made more than 90, and some even decided they wanted to continue working on dresses afterward.

“So many people, once they were here at the party, they decided they wanted to do more. My preacher’s wife went out and bought a sewing machine afterwards. It’s very contagious!”

Dingler said that even children and non-sewers joined in on the fun of her party.

“I had some of those little girls who had never touched a sewing machine, but we did it, and their confidence built. I mean, anybody can sew. The machine does the work.”

Dingler began making dresses in 2011, and shortly after she felt God was speaking to her heart to make a trip to Africa.

Though contagious and rewarding, Dingler said she felt that Little Dresses for Africa is part of her ministry, and God has provided throughout her journey with the organization.

Her mother was fighting cancer at the time that she first heard about the organization in late 2010 and passed away in April. Dingler said that she feels her mother was a part of God’s plan for her involvement in LDFA.

“It would have been hard for me to leave with her as she was,” she said. “Mother was excited about this project; she knew I was making the dresses.”

Set to leave in April, Little Dresses for Africa plans to send 6,000 dresses. However, Dingler said that far more than just clothing will be taken to the people of Malawi.

“On this trip we will actually do a Bible school with the kids,” Dingler said. “We are actually going to have a women’s conference while we are there. We are going to teach nutrition, sanitation and health issues.”

The average woman in Malawi has six to eight pregnancies. She does not carry them all to term or raise that many children, so education is necessary in this region of the world.

Since 2007, Little Dresses for Africa has made more than 300,000 dresses and they have come from every U.S. state.

Dingler says that for those who are curious about whether they should participate, the best thing to do is to give it a try. “Go ahead and get a pillowcase and make a dress. Make one. The dresses themselves are addictive. Once you’ve done it, you just feel like you want to do more. Talk to somebody about it.”