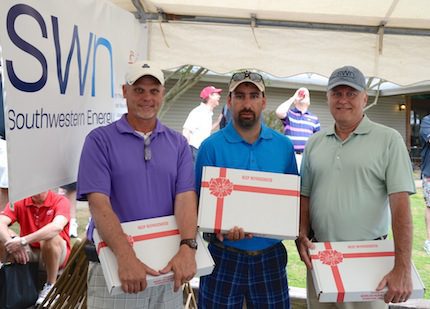 A field of more than 100 golfers enjoyed the three-person scramble under sunny skies.


Funds raised by the foundation through this and other fundraisers support the programs and facilities of UACCM. This year, funds will specifically support the upcoming capital campaign and efforts to raise money for scholarships, facility improvements and a new applied technology and workforce development center.


UACCM Foundation Board Chair Doug Cahill said the success of the tournament was made possible by the generosity of the businesses, individuals, vendors and volunteers who contributed. “The UACCM Foundation is thankful for the overwhelming support by area businesses and individuals who made contributions toward the tournament, as well as for the great turnout,” he said. “Special thanks to all those who participated.”

Also taking home prizes were Nelson Ennis for closest to the pin, Lucas Stacks for longest drive, and Dave Ward for longest putt.


The UACCM Foundation, which is comprised of a volunteer board of directors, oversees the various fundraising activities undertaken on behalf of the college as well as the management and allocation of the funds received. For more information and photographs, visit the UACCM Foundation at uaccm.edu.