Posted at 20:35h in Neighbors by John Patton
Share 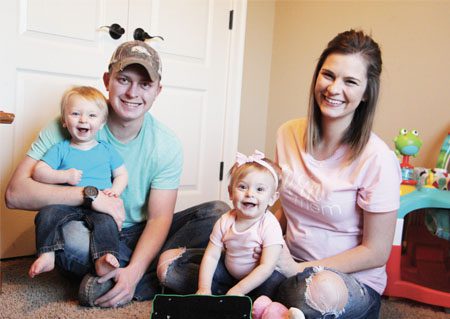 Tyler and Nicole Slatton of Vilonia with their twins, Christopher and Layla.

“Twinkle, Twinkle Little Star” is the theme that Nicole Slatton picked for her babies’ first birthday on Feb. 18.

The familiar nursery rhyme is not unusual for a first birthday party, but it also captures her life with twins. Slatton struggles at times when it comes to organizing routine events for her non-identical twins, Christopher and Layla. Color patterns have to be neutral. Parties can’t be gender specific. “You can’t have a Bob the Builder party with princesses,” said Nicole.

Life for Nicole and Tyler Slatton, of Vilonia, has been all about the twins for over a year. The Slattons were among 36 families with twins born in the Conway Regional Women’s Center in 2017. Nicole is senior office coordinator at Greenbrier Family Medicine, and Tyler is an automotive painter at Rock Collision and Classics.

Twin life is a new experience for Nicole, whose family did not have twins, and more of the “same old” for Tyler who has an identical twin brother, Taylor.

While difficult at times when both babies are upset, Nicole and Tyler have found life with twins to be fun and different and anything but boring.

The stories are abundant.

During play, Layla jumps on Christopher’s “back and starts laughing as loud as she can, then Christopher joins in the laughter,” recalls Nicole. “That’s so funny because Layla was laying on top of him the whole time they were in womb. He didn’t have much room.”

Nicole is a big believer in the bond between twins. “Although they can’t talk to us yet, they seem to be able to talk to each other. Layla can be in another room playing and she will turn around and look at Christopher, and he will come right to where she is and they will start playing,” said Nicole.

Layla, the picky eater of the two, will push food over to Christopher so he will eat it. Layla doesn’t like to wear shoes and socks, so Christopher pulls them off for her.

“It’s just normal for me,” said Tyler, who recalled his relationship with Taylor, his identical twin. “We both played together, but we were pretty much different from the get-go. We wanted to be different, but we wanted to do the same thing.” Tyler and Taylor refused to dress alike as they grew older, and  became “rebellious” as teens.

“We would switch classes to mess with the teachers. A lot of times they thought it was funny and would let it slide. I was better at art, and he would be better at English, so he would get two English classes, and I would get two art classes.”

While Tyler’s family is used to twins, Nicole has gotten some interesting questions from her side of the family as well as from others.

“There is no hiding with twins. You get stopped everywhere you go; you get a billion questions. If we only have one of the babies, we are incognito,” said Nicole.

Who was born first?

Do you get them mixed up?

“This is funny for us because one is a boy and one is girl. Layla has dark hair, and Christopher is blonde, but people always say how they look alike.”

How do you pick which one to feed first?

“Whichever one is hungry first.”

Do twins run in the family?

“They run in my husband’s family, but that’s not why we have twins,” said Nicole. She says it is due to fertility medicine.

“When we were four weeks pregnant, we knew. Progesterone levels were in the 2,000s. We almost had a heart attack thinking we were going to have eight. Went in at six weeks, and Dr. Michael Wood said, ‘Yep, you are having twins.’ They were the size of a grain of rice.”

Her most disliked reaction from others: “I’m so sorry; your hands must be full.”

Nicole says, “They are filled, but they are filled with love, joy and the greatest gift I could have ever gotten.”

Nicole concedes that “being a twin mom has been the hardest thing I have ever done.” She explained, “When you are a twin mom, you learn to do everything twice as fast, although it takes twice as long. You learn to care for two little babies, which means twice the tears, twice as many falls and twice the mess. But all at the same time, your heart is growing twice as big. The love I have for my twins is like nothing I’ve ever experienced.”

She has leaned on advice from Tyler’s family. “Be ready to have your hands full. No one’s ready to have one baby, just remember. We’re going to help you.”

She has also turned to social media’s Mommy Mafia, a Facebook page for moms of twins. “You have to show a picture of an Ultrasound image of twins to join the page,” said Nicole. “It was really helpful because you can get help and help other twin moms figure out what to do in certain situations.”

She also passes on a few tidbits of wisdom for other moms expecting twins:

You definitely don’t have to get two of everything.

They will be different people.

Your hands will be full, but you are going to be so in love.